The next time you are shopping for daylilies, if the plant is in flower, feel the petals. You may find that some of the flowers have much thicker petals. You will also note that some plants have flowers are larger and of a more vibrant color than other daylilies. The plants themselves will be more robust with bigger and thicker leaves.

Plants have the ability to produce an entire plant from one cell taken from any part of the plant. This is known as totipotency. This is what makes it possible to raise identical plants from a single cell of the mother plant; a technique often used to mass-produce hybrids which will not grow true from seed. You have all heard of cloning and this is it.

If an identical plant is to be grown, cells from shoot tips and axillary buds are used. The cells are prepared and placed in petri dishes in an appropriate medium. Each cell will produce a single tiny plant that will grow into an exact replica of the original.

If an altered or improved plant is on the drawing board the cells from internodes and leaves are used. There are several ways that these cells can be manipulated to make bigger, more productive or more desirable plants. One way involves dissolving the cell membrane with an enzyme. These “naked” cells are called protoplasts and millions of them can be harvested from a gram (1/30th of an ounce) of leaf tissue. With the interior of the cell exposed the nucleus can be genetically engineered or fused. Fusing two nuclei produces two sets of chromosomes or tetraploids.

When plants are raised from single cells in tissue culture a phenomenon known as somaclonal variation takes place. This just means that the mutation rate is higher than in plants grown in the normal way. Many of these mutations result in better more vigorous plants. Some desirable altered traits that have come about in this way include variations in disease resistance, leaf shape, growth habit, maturity date and yield.

A second way of producing tetraploids is the adding of a mutating agent to the cell cultures. Daylily cultures are often treated with colchicine, an alkaloid obtained from the autumn crocus. The resulting plants are then screened for tetraplody both microscopically and on the basis of thickness of flowers and leaves 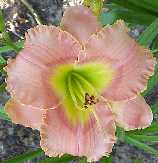 Tetraploid daylilies are fertile and can be breed with other tetraploids. They cannot be bred with diploids to produce fertile seeds. The cross of a diploid and a tetraploid produces a sterile “mule” with 3 sets of chromosomes that are unable to form pairs.

Tetraploid daylilies are fertile and can be breed with other tetraploids. They cannot be bred with diploids to produce fertile seeds. The cross of a diploid and a tetraploid produces a sterile “mule” with 3 sets of chromosomes that are unable to form pairs.

The down side of tetraploid day lilies is that the flowers, while bigger and more brilliantly colored are fewer in number. The plants are vigorous but slower in their growth habits than diploid plants. They will grow for many years in one place without having to be divided. While this is not a happy thought for the grower it may indeed be a boon to the gardener who doesn’t wish to divide plants every two years.

Diploid or tetraploid daylilies are a valuable plant in any garden. The Fulva or wild ones make an excellent ground cover for a bank or other area that gets little attention. Whether you prefer your flowers full bodied or of a more delicate nature is, as always, a case of beauty being in the eye of the beholder.