Knock on wood, one of those odd things that people do for which they can not give much of an explanation. We think that it’s just superstition and it prevents bad luck from plaguing whatever is under discussion. Knocking on wood, however, has a long tradition and it has everything to do with trees and their importance in mythology and religion.  Knocking on wood or touching wood was a way of asking for the protection of the spirit of the tree. It was a means of shielding against evil or mischievous spirits that might be lurking about to put a kink in plans and schemes of mankind. Trees were very important in the religion and folklore of ancient peoples especially those who made their homes in the British Isles. 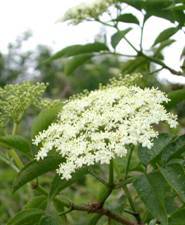 There were two trees in particular that were planted by Celtic householders to ward off evil l the elder and the rowan. The elder (Sambucus nigra) was planted at the back door to ward off harmful spirits and witches. It was especially auspicious if the tree self sowed in this location. This is the European elder not our native elder from which we harvest elderberries for jelly. Our native tree is a Sambucus canadensis and is very similar.

There may well have been a practical reason behind the placement of an elder tree by the kitchen, as the odor of the leaves repels flies. They were also planted around privies, bake houses (where they were said to keep the devil at bay), slaughter houses and dairies. Bake goods were cooled under the branches of the elder tree and cloths used in the dairies were laid over the branches to dry. While the elder tree was alleged to protect against witches and other harmful spirits it really did protect against bacteria and diseases carrying flies&

The rowan tree was customarily planted by the front door. The tree in European mythswas the European mountain ash or Sorbus aucuparia. There  are 3 native American species of mountain ash but the European rowan is also commonly found.  The red berries are eaten by a number of species of birds including the waxwings and thrushes, which then disperse the seeds in their droppings.  The tree can be found in roadside thickets in cooler and high altitude regions of the U.S. It does well in peat or clay soils that are reasonably moist. The rowan prefers a neutral to acid soil and will grow in as an under story tree, tolerating moderate amounts of shade.

Unlike the elder tree which has actual repellant properties, even if they apply to flies rather than witches, the rowan has no such properties. Still it was considered excellent protection against “ghosties and ghoulies and long-legged beasties and things that go bump in the night”. An old proverb says, “Rowan tree and red thread put the witches to their speed,” The red thread refers to the custom of making a cross of rowan wood and binding it with a red thread as a protection against witches. The red of the berries was also considered a safeguard and the berries were often carried or sewn into children’s clothing. The berries have a five pointed star or a pentagram opposite the stalk, another charm that was considered a very strong defense.

The rowan tree was brought to my attention by Jeanne as a comment on the Halloween garden in the November issue of the newsletter. I thought it might be fun to plant one as I have an elder within shouting distance of my back door. Alas, we also have deer and the mountain ash is one of their favorite foods. Efforts to establish stands of it in central Europe have been thwarted by four- legged marauders whose munching habits keep it from setting fruit and propagating itself. Also, it is reported to take 15 years to produce berries and it is necessary to have two for good berry production. Our area does seem to be ideal for their growth, the deer notwithstanding, so if you should find a stand growing wild here is a recipe for rowan jelly.

Pick over the rowan berries, removing any stalks, wash if necessary, drying well.
Wash the whole crab apples, removing any bruised parts.
Place the fruit and just enough water to cover into a heavy bottomed saucepan.
Bring to the boil and simmer, covered for 20 – 25 minutes, until tender.
Strain through a jelly bag or muslin cloth, allow about 4 hours for this, do not squeeze as this will cause the jelly to become cloudy.
Measure the volume of the liquid, add 450g (1lb) of sugar for each pint (600ml) of liquid.
Place the sugar in an ovenproof bowl and put it in the centre of a pre-heated oven for 10 – 15 minutes.
Place the juice back into a heavy bottomed saucepan, add the sugar, stirring until fully dissolved.
Bring to the boil and cook rapidly for 10 – 15 minutes until the setting point is reached.
Skim the surface if necessary, allow to cool slightly then pot.