Quinoa (Chenopodium quinoa) is one of those new/old plants that have been rediscovered and, in this case, taken its place in the health food market. Native to the Andes, it was a substance crop for the Incas as from approximately 3,000 BC until the early 16th century. Known as “the mother grain” was considered to be a sacred gift of the gods and the first seeds of the season were planted with great ceremony and a gold shovel.

The decline of the grain began with the Spanish conquests in the early 1500s, led by Francisco Pizarro. The Spaniards introduced different eating habits and European grains. The planting of quinoa (pronounced keen-wa) declined until it was cultivated by only a few peasants in the remote higher elevations of South America, where it thrives in the cool dry climate of the Andes.

The fact that quinoa can grow in areas where other grains do not do well has brought it to the attention of modern day researchers. Not only does it grow in elevations to 7500 feet but it is salt tolerant, as well. It does not require large amounts of either water or fertilizer, although research has shown an increase in yield with the application of nitrogen. No increase was measurable with the addition of potassium or phosphorus. These characteristics make in an important crop for non-technological areas with poor soil. 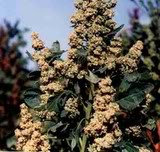 Quinoa seed produces is what is called a complete protein. It contains all 8 amino acids needed in the human diet. Typically most grains are low in lysine, cystine and methionine. It has a 10% to 18% protein content. It is also a good source of calcium, iron, B-vitamins, and vitamin E. Quinoa is a relatively high fat content grain containing 13% to the 4% found in brown rice. The high fat content affects the storage qualities of quinoa and it does not have a long shelf life.

Quinoa is sold prewashed because of the saponin content of the seed coat. While prewashing removes most of it, a rinsing of the grain before use is advised. Saponin can reduce the absorption of nutrients from the small intestine and cause actual intestinal damage. It will also cause a bitter taste in the prepared food. Saponin is a soap- like substance and will cause visible foaming if still on the grain. In South America the quinoa saponin is used as a detergent for washing and as a skin antiseptic.

Quinoa is a member of the Chenopodium genus, which contains over 120 species. Its name comes from the Greek chen which translates as goose and pous which is foot. This refers to the shape of the leaf that is  triangular and resembles the webbed foot of a goose.

If the name goosefoot sounds familiar you may have a very near relative of this plant as an invasive weed in your garden. More commonly known as lambs quarter or pigweed but also known as goosefoot, Chenopodium album is a common weed in this area.  Compared to the 5 foot C. quinoa, C. album is a much smaller plant. When it grows higher than a foot it tends to become recumbent because of the weight of the seed head. Both the young leaves and the seeds, which contain 16% protein, are edible. The plant also sustains chipmunks, squirrels, birds and butterflies.

There are a number of different types of quinoa but the three most widely cultivated produce a while, red and black seed. The red quinoa is available at our local stores. It has a nutty flavor with a crunch. The seeds are about the size and shape of a sesame seed. As the grain cooks the white germ layer twists outward making a spiral tail on the grain, which frequently detaches. It gives a rather unfortunate look to the dish for those with imagination.

Quinoa can be substituted for rice or other grains in cooked dishes. It can also be used as an addition to or a basis for salads. The texture is so different from what we are accustomed to that I suggest starting out slowly with it. Add it to brown rice, white rice or barley or toss some into a salad. I haven’t had a chance to try it with stir fry but I suspect the cooked grain would be an excellent addition to stir fried vegetables. We will have some at the April meeting. Perhaps the following recipe

salt and pepper to taste

Simmer the quinoa in the vegetable broth about 10 to 15 minutes, or until water is gone and quinoa is light and fluffy when stirred. Remove from heat and allow to cool.