Winter is a good time to think about ways of making the coming growing season easier on both backs and knees. Certainly, one of the most onerous tasks in the gardener’s repertoire is pulling weeds. Anything that keeps weeds from taking over a flower bed or border, foundation planting or other cultivated area has got to be a good thing, so perhaps we should start considering green mulches.

Often we find the term green mulch used to describe cover crops. These are legumes such as clover or green manures like ryegrass. These are put in in the fall and plowed under in the spring. While they can shade out some fall weeds, their main purpose is to enrich the soil and, of course, their use is confined mostly to the vegetable garden or to a plot used for annual flowers since they must be dug into the soil.

There is another kind of green mulch, ground cover. Ground covers serve a multitude of purposes from holding soil in place to conserving moisture, to keeping weeds in check. One of their major purposes in a flower bed is to shade out seedlings so that weeds do not proliferate. Any bare patch of ground will often produce hundreds of seedlings so close together that pulling all of them is extremely time consuming. While groundcovers will not totally eliminate weeds, they will help keep them under control.

One of the things that rural dwellers must consider when choosing green mulch is its desirability as deer fodder. There is little point in planting a ground cover that is going to be munched down to bare stems for most of the growing season. Not only will it look untidy, but it will not keep weeds in check. There are a number of good, low growing ground covers for our area that provide  coverage for bare soil between plants and do not attract deer to the area.

One of the best ground covers for keeping down weeds and one that thrives in shady areas is sweet woodruff (Galium odoratum). The only problem with it is that it can become a weed itself. It does have a shallow root system so that it can be easily removed in large sheets from around perennials or if it overgrows. It is great under trees or bushes and is especially beautiful in the spring under dwarf Japanese maples. The white flowers are striking under the glowing red leaves of the maples. The fine cut foliage is decorative throughout the year and the leaves can be dried for potpourri.

Sweet woodruff will grow well in full to part shade. In sunnier, drier areas it goes dormant in the hotter months. It does like a fair amount of moisture and is at its best in areas that get only the morning sun. 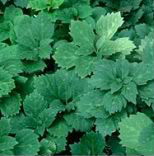 Pachysandra is an old ground cover that seems to have fallen out of favor. There are two kinds; Pachysandra procumbens or Allegheny spurge is a native plant and  Japanese spurge or Pachysandra terminalis is an import.  Allegheny spurge is an attractive evergreen plant that spreads by rhizomes. The leaf edges are scalloped and the blue/green leaves are often mottled with silver and white. It produces a white to pinkish white spike of flowers mid spring.

Allegheny spurge likes a full to partial shade location and moist but well drained soil. It works well for erosion control on shady banks. This pachysandra is not partial to very wet or heavy clay soils but does like its soil acidic. It is also useful under trees and in shaded spots in the lawn where grass will not grow. Since after the new growth is established in the spring old growth tends to die out, removing unsightly leaves can be a bit of a problem.

There are a number of hybrids of this native pachysandra. ‘Eco Treasure’ has a more variegated leaf. ‘Pixie’ is identical to the wild variety but is a miniature. The miniature variety forms clumps and is very slow to spread.

Japanese pachysandra or Pachysandra terminalis is the plant most commonly found in garden centers.  It has plain, shiny, green leaf and produces a spike of white flowers in April.  It requires conditions similar to Allegheny spurge. The plant will tolerated periodic dry conditions but requires adequate moisture with good drainage for most of the year. It grows in neutral to slightly alkaline conditions. Japanese pachysandra is not sun tolerant and will stop producing chlorophyll if given too much sun. Chlorosus or yellowing of the leaves will also occur if drainage is not adequate and the soil becomes water logged. This condition leads to the death of the plant. It is recommended for deep shade conditions under trees and foundation plantings to the north or east side of the house.

The most commonly planted variety is ‘Green Carpet’, which is popular for its dark glossy green leaves, cold hardiness and compact dense growing habit. The very density of the growth pattern can cause fungal problems in a wet spring. ‘Silver Edge’ has a cream colored variegated edge.

Spotted dead nettle (Lamium maculatum) is a useful groundcover for shady dry areas. These are preferred conditions; it will grow in a wide range of conditions including moister or sunnier areas. It is another plant that the deer will not bother.

Dead nettle adds an interesting color and texture to the shade garden. The flowers are either white or pink and the plant blooms in May or June. The leaves are variously variegated in shades of gold and silver and are crinkled. ‘Beacon Silver’ has dark green borders with silvery green centers. The flowers are pink. ‘White Nancy’ is the same plant with white flowers. ‘Album’ has silver white blotches on dark green leaves. This variety has white flowers. ‘Pink Pewter’ has green borders with silver centers. The flowers are light pink. ‘Chequers’ has green leaves with a narrow silver center. This is another pink flowered variety. ‘Dellam’ also known as ‘Golden Anniversary’ has a gold edged green leaf with purplish flower. ‘Elizabeth de Haas’ has gold spotted leaves and pink flowers. There are a large number of other varieties.

These plants increase their numbers by stolon and can be divided in the spring. As a member of the mint family, they can get out of hand. They also produce seeds and these seeds can result in different leaf and flower colors appearing in the Lamium patch. They do breed fairly true but occasionally I have found varieties that I didn’t plant. It is always a delightful surprise when something new pops up.

One could hardly list under plantings, green mulch or ground covers without mentioning periwinkle or Vinca minor. Periwinkle can be slow to establish but once it has entrenched itself it will spread at a reasonable rate by rooting at the leaf nodes. This one will grow in moderate shade to sun. The leaves are evergreen and the dense foliage and strong root system is especially useful in keeping weeds under control. The beautiful blue flowers are a bonus. The plant blooms in spring, usually a shade of blue that has been immortalized as “periwinkle”, but in pink, white and purple as well, depending on the variety. The flowers will often appear again in the fall.  Flowers are more abundant when the plant is grown in full sun.

Periwinkle isn’t very particular about soil. It will tolerate wet soil and also thrives on well drained dryer slopes. It is an excellent plant for erosion control.

Be careful when buying Vinca as there is an annual plant also known as Vinca. This plant, Catharanthus roseus, looks very similar to the perennial form.  It too is a great plant but will not be back next year.

If a ground cover is needed for dry sunny conditions there are always the low growing sedums. Sedums are virtually drought proof. They also grow in fairly wet soil, although the books don’t usually mention that fact. These plants have very shallow root systems so will grow on almost anything with an inch of soil. They grow on walls, rocks and really terrible soil with a bit of added top soil.  Some sedums can get out of hand but aren’t really difficult to control. Pulling them up is as simple as removing a mat.

There are hundreds of different varieties of sedums and quite often they aren’t sold with names. Sedum ‘Angelina’ is a particularly lovely variety.  It has gorgeous gold foliage which turns red in the fall. It flowers yellow in early summer.  Sedum reflexum ‘Blue Spruce’ has bluish foliage that strongly resembles its namesake. ‘Dragon Blood’ is one of the more commonly available with pretty rosy pink flowers

Bugleweed (Ajuga reptans) is also excellent for full sun, although it will grow in partial shade. It likes rather moist soil with a neutral pH. Bugleweed forms a dense mat, so that it is excellent for keeping weeds from growing. It, however, can easily become a weed itself as it spread rapidly from runners. It can work its way into the lawn where it is difficult to get rid of. Still it has its place.

Bugleweed produces a very pretty spike of blue flowers in May or June. The original form of Ajuga reptans has plain green foliage. There are much prettier forms now available. Ajuga genevensis ‘Pink Beauty’ has pink flowers but requires shadier conditions. ‘Toffee Chip’ has a variegated cream and green leaf with blue flowers. This is a fairly new variety. ‘Burgundy Glow’ has variegated white, pink and green foliage. The variegated forms will frequently produce plants with plain leaves. If these aren’t removed they will crowd out the more attractive varieties.

Nature will not allow ground to remain bare. If you don’t choose to reapply bark mulch every year these green mulches can be very helpful. Nothing keeps all weed seeds from germinating but shading the ground can eliminate a goodly number of them. These and many other available ground covers can help provide that shade.