We had a very peculiar spring this year with days that were more suitable to July, followed by temperatures that dipped as low as 20 degrees. This brought many of our spring flowering ornamental trees into premature bloom only to have those blossom destroyed by low temperatures. Throughout all of this there was one tree in my yard, and indeed growing wild in the surrounding woodlands, that shouted out “let me be a lesson”.

We tend not to value our native trees until we see them surviving and flourishing in the worst of local conditions. The tree that bloomed throughout most of March, through everything that Mother Nature could throw at it, and continues to bloom into April is the Juneberry or serviceberry tree. 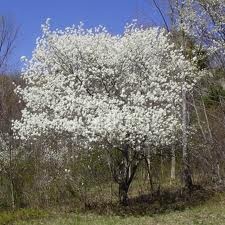 This hardy native tree has many names.  Its proper name is Amelanchier arborea and it is a member of the rose family (Rosaceae). There is a lot of confusion as to nomenclature in the Amelanchier genus and there are about 20 species. Although arborea can and does hybridize with some of the other species, it is probably the one that we are seeing in our woodlands.   Two of its common names shadblow and shadbush come from the fact that the tree blooms at the same time that shad begin their migration upstream to spawn in the spring. It receives the title Juneberry from the ripening of the fruit in June. Service berry and sarvis are a little more obscure. One theory is that the blooming time corresponded with the time the roads opened in the spring and congregants could begin to attend religious services again. A more academic version has the name coming from the similarity of the fruit to that of the ash tree (Sorbus).

Whatever you call it this is a very pretty tree. It is always the first tree to bloom in the spring, usually starting in March in our area. The five petaled and fragrant white blossoms cover the tree before the leaves emerge. They are born in pendulous racemes of two to four inches long and ordinarily don’t last very long. This year was a spectacular exception.

The flowers are followed by a fruit that closely resembles a blueberry. It is edible in both the red and purple stages but the sugar content is higher if it is fully ripe. Unlike the blueberry, the Juneberry contains a number of conspicuous seeds. Since these seeds have an almond flavor they enhance rather than subtract from the savor of the fruit. They can be used in pies or jams or anyway that a blueberry is used. The fruit is said to have a high pectin content so will jell readily.

That is if you can get any of the fruit. The fruit is relished by over 40 species of birds, as well as chipmunks, squirrels, foxes and bears. The birds strip the trees bare almost as soon as the fruit begins to ripen. Since the trees are bee pollinated, and often bloom quite early before the bees are working, there is not a crop every year.

The tree is relatively small and can also form a multi-stemmed bush.  In a tree form it reaches a height of 15-25 feet with rare exceptions reaching 40 feet.  The taller ones are found wild growing in open woodlands and along stream banks. In cultivation the Juneberry tends to be smaller, making it ideal for cramped areas.

The shape of the tree is round and the branches are separated enough to give a light airy look.  The bark is smooth and grey with vertical markings. New growth is olive green in color. As the leaves emerge the undersides are covered with fuzz that disappears as the leaves age. This fuzz is characteristic of our local Juneberry and is the reason that it is often referred to as downy serviceberry. Fall color is spectacular leaning toward oranges and reds.

Amelanchier arborea is basically an understory tree. It will grow in full sun but prefers the less bright conditions of an open woodland situation. It does well along streams and in damp locations, although it will grow on sandy banks and in dry areas. It favors acidic conditions and cheerfully grows in our heavy clay soil. This is one of those tough plants that will adapt its growth pattern to the situation in which it finds itself.

If it finds itself in your backyard do grow it against a background of evergreens. The airy white blossoms make their best show when highlighted by a darker companion plant. The rich color of the fall foliage is also best seen against this type of background. While they are often planted in clumps, the delicacy of the tree is best highlighted as a specimen plant. The plants are said to sucker although I’ve seen no evidence of it. Propagation is generally by seed scattered by birds. The seeds need to be stratified before they will germinate.

Serviceberry is the larvae plant for tiger butterflies and viceroys. It is also much beloved by gypsy moths during the larval stage. Reports suggest that serviceberries increase in number and density after defoliation by gypsy moths. If nothing else serviceberries can act as a trap plant to protect more valuable trees during gypsy moth attacks.

There are a couple of hybrids of Amelanchier arborea.  ‘Robin Hill’ is known for its pink flower buds and abundant fruit. ‘Autumn Brilliance’ is grown for its bright red autumn foliage. ‘Rainbow Pillar’  has blue green foliage in the spring that changes to a brilliant orange, red, yellow rainbow in the fall. . ‘Cumulus’ is distinguished by the abundance and delicacy of its white blossoms that resemble the cloud for which it is named. These are not to be found in local nurseries probably because the wild ones are so abundant in our local woods. We rarely value what is commonplace and it is to be doubted that these cultivars are much of an improvement over our natives.

Go dig one up! They transplant well. Mark it in the spring when it flowers; they flower when quire small. Wait until late winter and do your digging then. Lisa and I moved one many years ago and it survived transplanting. They aren’t protected in anyway but to avoid arrest for trespassing consult the property owner if possible.