We will continue with the second half of the plant propagation class.  In November we covered sexual prorogation or propagation by seed. This month we will do asexual propagation or propagation from a plant part. In all of its manifestations this is a form or cloning. With special equipment it can be done at the cellular level. Generally though what the gardener uses are stem, leaf or root cuttings. It also includes layering budding and grafting. The advantage of asexual propagation is that the plant produced is exactly like the parent plant and a large number of duplicates can be produced quickly.

When choosing a plant for cutting it is important to start with health stock. Even if the cuttings look clean bacteria and fungi can be systemic and invisible. The plant should be in good condition nutritionally, as the cutting will have to be healthy enough to survive until it produces its own roots.

The plant part, either a leaf; stem; or part of a root, should be severed with a clean sharp knife. Sterilization of the knife can be done by dipping it in a 10% solution of Clorox and water. The flower buds and flowers should be removed from a stem cutting if they are present. Usually, the petiole is left in place on a leaf cutting although some leaves will root along the central vein and are placed in direct contact with the soil. Root cuttings are either buried or placed on the surface of the soil. In most cases a growth point or eye should be included in a stem or root cutting. A rooting hormone may be applied though this step is usually reserved for hardwood cuttings.

The choice of a rooting medium is important. Some plants will root in a glass of water. The roots that are produced in water are fatter than normal roots. This allows for greater air exchange but is not necessarily desirable when the plant goes into soil. This problem can be overcome by adding soil gradually to the water after the roots develop giving the plant time to adapt to the new medium. When the soil has displaced the water and the medium dries a bit the plant can be moved to a pot.

For plants that are started in a solid medium something that is sterile, well drained but holds moisture and has a low fertility is a good choice. To produce a medium that is both well drained and also hold s moisture a mixture of different materials is usually required. At least one should drain well and the other should hold water.  Possible combinations are:  coarse sand and vermiculite, peat and sand, or peat and perlite.

In rooting herbaceous cuttings drainage is not as important as they generally root so quickly that problems do not develop. These cuttings include annuals and many houseplants.

Stem cuttings are probably the most common type of cuttings taken for propagation purposes. Herbaceous ones are the easiest. These are cutting 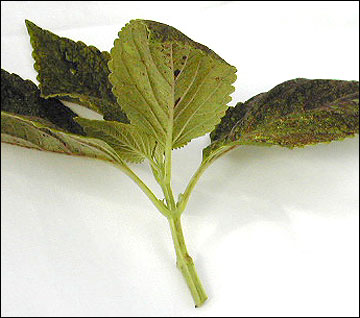 There are four different types of stem cuttings. Tip cuttings are taken from the first 2 to 4 inches of an actively growing branch. They typically have two or three leaves and have both apical and lateral growth points. Medial stem cuttings are taken from the mid portion of a branch and have only lateral growth points. These points may be actively growing or may be dormant.  Once the auxins produced by the apical tip are no longer present and inhibiting lateral growth one or more of these nodes will begin to grow.  A cane cutting is taken from the main stem of plants, such as dieffenbachia or dracaena that produces a leafless stem. These cane cuttings can be placed either upright or laid flat on the surface of the rooting medium. Heel cuttings or mallet cuttings are taken from woody plants. They are a portion year old stem with a portion of two year old stem attached.

Most types of stem cuttings should be dipped in a rooting hormone before being placed in the rooting medium. It is important to use the minimal amount, as excess rooting hormone can actually inhibit root growth.  In tip cuttings and other cuttings with leaves attached, the leaf tissue should be reduced to a minimal amount, as there will be a period in which there is no root to support them. Any leaves that will be below the surface of the rooting medium should be removed.  Medium should be kept moist but not sopping wet and good air circulation will prevent molds from attacking the cuttings.

Leaf cuttings can be used for propagation of certain types of plants. African violet leaves with the petiole intact will produce roots.   Jade plants 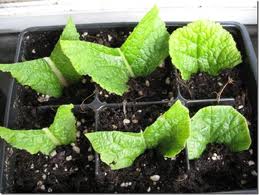 Plants can also be propagated from root cuttings.  Phlox are an example of a plant that can be multiplied with fine root cuttings. An inch of root laid on damp sand should be sufficient to produce a plant. Fleshy roots or rhizomes are a second type of root cutting. Most gardeners have propagated irises in this fashion. Often a plant will put up a sucker with some portion of a root attached. This is another way of taking a root cutting.

Woody plants can also be reproduced from root cuttings. Four to six inch pieces of root should be taken in the early fall. Pencil sized roots are best.  They can be placed in sand or rooting medium in a cold frame or in pots in the ground.  It is important to place them in the position in which they were growing. Polarity is important in root cuttings.

Commercial growers use mist systems to insure that their cuttings do not dry out. This is why they are probably more successful than home growers.  A misting system is probably not practical in the home but plastic bags and clear plastic containers are an acceptable alternative. It is important not to allow free moisture to accumulate, as it encourages the growth of fungi and bacteria.

Layering is a form of propagation that promotes the production of roots on a portion of a plant before the new plant is cut away from the parent plant.  The advantage to this type of propagation is that the small plant is fed and watered by the parent plant and is less likely to desiccate.  It can take from 2 weeks to several months for the roots to form.

There are a number of different types of layering. Tip layering brings the tip of a branch into contact with the ground.  This often happens naturally with bramble fruit. The gardener who wishes to propagate this way can dig a small hole and place the tip of a current season branch or cane into it. It will develop roots and begin to grow upward forming a new plant.  In simple layering the same process is used except a central portion of the stem is brought into contact with the ground.

There are a couple of techniques that will encourage the development of roots. The first is wounding. The bark is removed from a portion of the stem. This causes the accumulation of carbohydrates, which provide the nourishment for the formation of roots.  Rooting hormones can also be used. Since it is important that the stem stay in contact with the ground it should be securely anchored. Burying a stem is often insufficient to keep it in place, so other means should be considered.  Stiff wire hoops or even stones will secure the branch against movement by wind or weather.

Air layering is a more sophisticated form of layering. This is used on thick stemmed plants and is often used to rejuvenate houseplants that grew tall on a single heavy stem. In air layering the stem is wounded or even girdled. The wound is kept open by a wedge or inserting sphagnum moss. 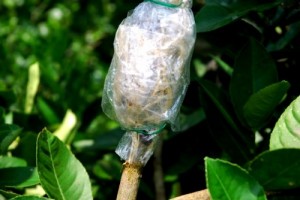 The entire area is then wrapped in sphagnum moss secured with twine. Wrapping the bundle in plastic keeps it from desiccating and the addition of aluminum foil will keep it from overheating.  Once the roots have formed all of the wrappings can be removed and the new plant can be severed below the roots and planted.

Division is a form of plant propagation with which gardeners are most familiar. It is practiced on any plant that forms a crown with multiple growth points. Many woody ornamentals and herbaceous perennials can be propagated this way. The plant is dug up and divided into multiple sections using a sharp spade or pulled apart with the fingers.  The larger the sections the faster the plant will grow and the more likely it is to survive. The individual plants are replanted and kept well watered until they recover and begin active growth.

Many bulbs naturally produce small bulblets and this is another form of propagation by division.  For bulbs such as hyacinths, that don’t normally produce bulblets, they can be encouraged to do so by cutting off the basal plate or root section. This procedure is called notching. After the basal plate is removed the bulbs can be put in moist peat moss and after several months bulblets will begin to form.  Notching also works for corms.

Tubers, such as dahlias, can be cut into pieces and as long as each piece has an eye it will produce another plant. Many plants propagate from rhizomes which are traveling roots. They will often produce a plant at a growing point and it can be dug up and replanted.  Stolons are above ground, horizontal stems that have nodes that will produce roots and stems.  Runners are similar to stolons and both are examples of natural layering.

Budding and grafting were also on the agenda but unfortunately there wasn’t time to get into them. If anyone is interested we will see what we can do about getting these techniques explained.