Sandy, our Oil City member, sent some pictures from a Montreal competition in mosaic culture. This event is held every three years in various cities and brings together the practitioners of this art to create wondrous living sculptures using plants. This year the competition was held in its home city of Montreal at the Montreal Botanical Gardens. The Quebec branch of the society, International Mosaiculture Montreal, has won awards at the 2006 and 2009 competitions in China and Japan respectively.

The theme this year is one focused on bio-diversity: Land of Hope. Each artist endeavors to create a sculpture that reflects his nationality and culture. They will strive to incorporate “the interdependence of man and nature, positive actions for the environment, endangered or at-risk species or ecosystems, nature in the city, the beauty and fragility of life on earth and peace as the key to planetary survival.” This year 200 participants, working in teams come from across the world including Canada, Belgium, China, South Korea, Spain, the United States, France, Japan, Mexico, Turkey and representatives from many African nations. .

This art form uses the color and lecture of plants to form living sculpture. Unlike topiary, which prunes and coaxes a single plant into a shape that it would not ordinarily attain in nature, mosaic culture uses multiple plants. The plants are set into a form to produce the finished living plant sculpture.
The production of these living sculptures is a major undertaking. The contestants must submit their detailed plans a year in advance. Constructions worker then go 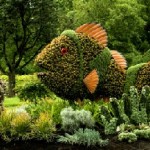 to work on creating the steel armatures that are the foundation or skeletons of the creations. These supply the support for structures that can reach a height of forty feet. These are wrapped in a steel mesh to hold the cultural materials. Watering hoses are threaded throughout the structure. The construct is the filled with dirt and moss to support the plants. Proper growing conditions must be provided as the sculptures are not a temporary art form but projects that are ongoing.

Three million plants are used in the sculptures. They are specifically ordered for texture and most importantly color. The predominate colors selected are brown, multiple shades of green and tan. There are plants in accent colors of purple, yellow, pink and red. These are all leaf colors. While there are a few flowering plants in the various arrangements few are used in the actual sculpture. The plants used are mostly annuals with a few perennials. Some of the more interesting textures are achieved with succulents.

The horticultural artists assemble in May to begin work on their creations. After the mosaic culture sculptures are finished they are allowed to grow for months before the judging takes place. The competition runs from June 22 to September 29. This year there are 50 of them; all fantastic. You can see them here: http://www.amusingplanet.com/2013/07/mosaiculture-exhibition-2013-at.html The following is entitled Lady and Crane: A Chinese Myth. It is my choice for the 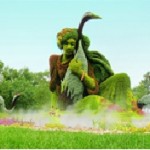 grand prize. Alternately, it is apparently also entitled A True Story and was entered by the city of Shanghai
“A True Story: The most touching exhibit, set to poignant music, tells the sad story of a Chinese horticulturalist who tried to save a beloved crane in distress and drowned in the process. Here, she embraces the beloved bird, its chartreuse, pale green and blue-green foliage contrasted against her ruby-red dress while mist rises from the pond below and a flock of other cranes gather.”

After much searching and having had to resort to a translation of something from Qatar I found that A True Story did take several prizes. If you check the web page with the pictures here are the winners. “The last edition’s winners include the works presented by China, A True Story!, entered by the City of Shanghai, and Planting Plane Trees to Attract the Phoenix, Beijing’s entry, who tied for the International Jury’s Grand Honorary Award. Mother Earth, presented out of competition by Mosaïcultures Internationales de Montréal, won the Qatar Airways People’s Choice Award as well as the Frédéric Back award. The latter award was also given to A True Story” The English is a bit odd but I’m quoting it as found. Do look at them. I wish I could print more of them here.