Bananas are weird! That yellow curved thing that you eat in your Cheerios or cornflakes is actually, by botanical definition, a berry. A berry is “simple fruit having seeds and pulp produced from a single ovary.” Examples are grapes, tomatoes, peppers and avocados.  Keep that in mind: one flower, one ovary producing a fleshy seed bearing structure known as a berry.  Keep it in mind because you are going to find out that some of your favorite “berries” aren’t. Technically berries come from flowers that have a superior ovary meaning that the ovary is attached above all of the other flower parts. All parts 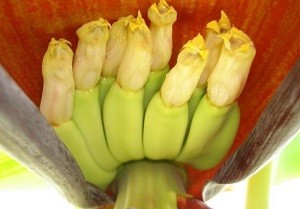 The banana flowers are the yellow structures with the ovaries inside the hypanthium below the flowers.

of the berry are produced from the ovary. Plants with inferior ovaries have the ovary attached at the bottom of the other flower parts. These plants produce a modified berry that has the hypanthium or floral cup, which is the structure at the bottom of the flower, incorporated into the fruit.

The next time you eat a banana take it apart. We are giving you permission to play with your food. Under the skin you will find those stringy things. They are phloem bundles, which carried nutrients. If you look on Facebook you will find a page dedicated to them. (No, we don’t understand either.) The common dessert banana can be divided into 3 parts lengthwise if you are careful. These are the three fused carpels or hypanthium that keeps the banana from being a true berry. The seeds are the little black specks. In modern bananas they are non-viable.

Modern bananas form without the seeds being fertilized or developing. The term is parthenocarpic. Banana farmers reproduce the plant from corms or suckers. The corms, or underground stems, can survive under natural conditions for hundreds of years, creeping a bit each year as the banana produces new suckers.

The simplest way to reproduce a banana plant is to remove a portion of the corm that has an undeveloped eye. These can be transported or left out of the ground for extended periods of time with minimal care. Alternately, a developed sucker formed at the base of the plant is removed. These can be detached with or without a root. Roots will develop if the suckers are placed in damp sand, although this is a more time consuming process.

Bananas do not grow on trees. The plants are herbaceous perennials. Because of their large size they are quite commonly mistaken for trees. A banana plant can range from 10 feet to over 23 feet tall, depending on the species, with the average being around 16 feet. What we would consider the “trunk” is a pseudostem. The pseudostem is formed by the multiple sheaths that compose the base of the petioles or leaf stems. The leaves, which can be as long at 9 feet long and two feet wide, develop at the center of the plant. The leaf sheaths are tubular but as they mature they open and are forced outward forming the layered pseudostem that supports the plant.

When the plant reaches maturity it stops producing leaves and puts up a flower stem from the plant’s center. Generally, each plant only produces one inflorescence but two or more are possible. The top of the inflorescence consists of multiple bracts. As the bracts open they expose the female flowers. The male flowers are below the bracts and may or may not produce viable pollen depending on the species. The female flowers produce fruit, in most cases, without being pollinated.  The bananas develop into a hanging “bunch” made up of tiers or “hands”. Each bunch can contain from 3-20 tiers with up to 20 fruit per tier. A bunch can weigh anywhere from 66-110 pounds.

All of the cultivated fruit today developed from two species, Musa acuminata and Musa balbisiana. These plants were fertile and had large seeds unlike today’s hybrids. There are over 400 different varieties of bananas, which include plantains. The difference between plantains and banana is commonly considered to be whether they are used for cooking or for eating out of hand. Plantains have lower sugar content. There are bananas that taste like strawberries when cooked, red bananas, green bananas, fuzzy bananas with bright pink skin and striped bananas that have orange flesh.  There is a banana that is so fragrant that its name translates to “you can smell it from the next mountain” (Go San Heong).  There are bunches of bananas that contain 1000 individual bananas that are each only an inch long. Very few of these ever reach our shores.

Bananas require a hot humid climate where the average rainfall is between 78 and 98 inches per year and the average temperature is 80 degrees. Most cultivated bananas are grown within 20 degrees of the equator on plantations in Mexico, Guatemala, Honduras, Nicaragua, Panama, Colombia and Ecuador. Many wild banana species and cultivars exist in New Guinea, Malaysia, Indonesia, China, and the Philippines. The banana is mentioned as far back as 6th century BC and is thought to have developed in the Indo-Malaysian region. They were first introduced into the US in 1876 at the Philadelphia Centennial Exposition of America where they sold for 10 cents apiece, which would be about 2 dollars in today’s currency. They are selling this week for 29 cents a pound.

Just a few of other interesting facts about bananas:

Bananas are slightly radioactive because of their potassium content.   A small amount of the isotope potassium-40 is found in naturally occurring potassium. The dosage from eating 1 banana is 1% of the normal daily exposure of 100 banana equivalent doses or BEDs. Yes, bananas are an informal way of measuring radioactivity.  It isn’t cumulative though so go on eating.

The Chiquita banana song was the most popular commercial songs in history being played over 350 times a day at its peak. For those of you who are too young to remember:

Bananas have to ripen in a certain way.

And when they are flecked with brown and have a golden hue,

Bananas taste the best, and are the best for you.

Any way you want to eat them it’s impossible to beat them.

But bananas like the climate of the very, very tropical equator.

So you should never put bananas in the refrigerator.

It was never recorded or sung by Carmen Miranda for those of you who are old enough to remember.

Bananas turn black in the refrigerator because the cold causes cell membranes in the skin to break down. Released chemicals combine to produce a compound similar to melanin, which turns the skins brown. The banana itself stops ripening in the refrigerator and stays firmer. Sealing the bananas in plastic and putting them in the crisper will keep them from turning brown for a reasonable length of time.

Released in 1923 and written by Frank Silver and Irving Cohn, the song Yes! We have no Bananas was the best seller in the sheet music trade for decades.

Americans eat an average of 27 pounds of bananas per year, more than apples and oranges combined. Germans eat 50 pounds and a monkey can consume at least 20 bananas a day which come to over a ton a year.