Every year the Perennial Plant Association chooses a “Perennial of the Year”. These plants are chosen on the basis of their versatility and adaptability to a wide range of climate and soil conditions, low maintenance, resistance to pests and disease and ornamental value over a number of seasons. They are also usually plants that are readily available, so they are rarely exotic hybrids. 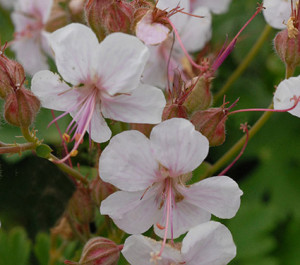 between zones 5 and 8 although it reportedly frequently survives reliably in zone 4.

Like most of the Perennial Plant Association picks this is not a spectacular plant but it has a subtle charm. The plant has a mounding habit and grows 6-12 inches in height. It spreads by rhizomes to about 2-3 feet. It increases slowly and is generally used as a groundcover.

The leaves are 7 lobed and are green with a muted shine in the summer months. They can reach 3 inches across in ideal conditions but more frequently are about half that size. They give the plant a delicate appearance and add texture to a mixed planting. The leaves are fragrant and are said to have a lemony odor when bruised. In the fall the foliage turns red/orange. The plant is evergreen and does not die back in the winter.

The flowers are delicate and, while they are held well above the plant, they do not make much of a statement unless viewed up close.  This is not a specimen plant and

flowers are not brilliant. The blossoms are ¾-1 inch across and have 5 petals, which curve backward from the center (reflexed). ‘Biokovo’ has white flowers with pink stamens and there is pink staining at the base of each petal. Some of the flowers will have pink striations. The flowers appear in late spring to mid-summer. The plant may bloom sparingly into fall.

Like most of the hardy geraniums, this plant prefers a cooler situation. Morning sun or partial shade provides the best setting. It is possible to grow it in full sun in cooler climates.  ‘Biokovo’ prefers well drained to average soil and is happiest if not over watered.

Hardy geraniums are very low maintenance plants. Shearing back after blooming will encourage more flowers but this isn’t necessary. As they are evergreen, some clean-up in the spring may be necessary. The plants are relatively disease free. They are not attractive to insects or slugs and are not generally eaten by deer, rabbits or groundhogs. Propagation is by division in spring or fall.

‘Biokovo’ is a small plant that makes a good filler in a perennial bed. It can be used in front of a perennial border and combines well with bulbs. The dense mat covers the ripening bulb foliage and adds interest to spring beds as they transition into summer blooms. These plants are excellent for rock gardens or areas where they will stand out against a neutral background. They can be naturalized on shady slopes as a soil retaining ground cover.  Grow ‘Biokovo’ with some of the bluer hostas for a nice color contrast or with lamb’s ear. Tuck some into a hanging basket with blue lobelia and some licorice vine for a nice color and texture combination.

I actually grew this plant for three/four years. It was planted in a fairly well drained bed that had quite a bit of sand mixed in with the soil. There were crocus, daffodils and a few tulips for spring bloom. Bleeding hearts filled the rest of the bed and a few low growing hostas were planted toward the front… There was also some catmint in there that was nearly impossible to get rid of. The bed got morning sun and was shaded by the house in the late afternoon.

The plant got off to a slow start but was doing quite well by its third year. Despite the winter of 2013-2014 where we had temperatures that reached -10 degrees F. and lower ‘Biokovo’ reappeared in the spring of 2014. It was all downhill from there. The area was getting too overcrowded and I cut things back to provide more sunlight in the early spring. The bleeding hearts then proceeded to cast more shade later on. I dug them out as soon as I could but by that time ‘Biokovo’ was reduced to a very small area. I potted it up but it didn’t survive. Whether the excess shade and dampness resulted in its demise or whether other factors, such as the very cold winter, were involved, I couldn’t say. There is the possibility that it had lived its allotted life span and departed this earth for greener pastures.

Many plants do have a limited life span and the hardy geraniums seem to be among them. If the plants are not divided every three years they fade away. 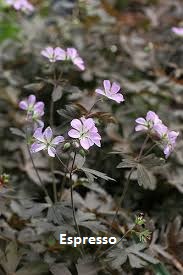 I’ve had this happen both with ‘Biokovo” and the blue geranium ‘Johnson’s Blue’ (Geranium himalayense x pretense). They are fine for a few years and then gradually disappear. By the time their fading is noticed, it is usually too late to divide them. The ones that reseed themselves such as ‘Wargrave Pink’ (Geranium × oxonianum) and mourning widow (Geranium phaeum) do not have this problem. I am also growing ‘Espresso’ (Geranium maculatum ‘Espresso’), which has a marvelous chocolate foliage and ‘Rozanne’ (Geranium ‘Rozanne’, which was the Perennial of the year for 2008. They are both growing strong and I will seriously consider dividing them in the spring before they go the way of ‘Biokovo’ now that I am aware of this peculiarity in the genus.