After many years of gardening in a single planting zone it is rare to discover a plant that is not familiar at least in the abstract. On our recent field trip I found Rodger’s flower. This is a non-native plant, which may explain the fact that its common name obviously comes from its taxonomic nomenclature. Apparently, this Asian import has never been sufficiently popular to acquire a descriptive of folksy label despite the fact that the genus was officially recognized in 1850. It was named for the US Admiral, John Rodgers, who commanded the expedition during which the first member of the genus was discovered.

Rodger’s flower belongs to the Saxifrage family that contains 48 genera among which the most familiar to us are Bergenia, Astilbe, Heuchera or coral 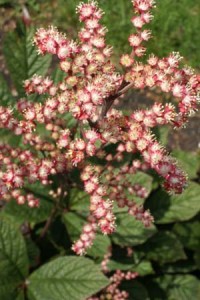 bells and Tiarella or foamflowers. Rodger’s flower closely resembles an overgrown astilbe.  What makes it standout is its huge size. According to the tag the one I now possess is Rodgersia pinnata ‘Hercules’. It can be expected to reach 36-42 inches in height. The pink astilbe type flower towers another 2 feet above the plant.

The spectacular flowers are said to be apetulous meaning that they have no petals. The flowers are made up of sepals and stamens. Pinnata has 10 stamens, a fact that helps distinguish it from other species of Rodgersia.  (More on that later.)  Blooming occurs in June or July. Although it spreads by rhizomes, this type tends to form large clumps rather than spreading promiscuously. It can be expected to reach a diameter of 36 inches and make a bold statement that will catch the eye of any passerby and stun the avid gardener.

The species pinnata is distinguished by its bronze tinged foliage. All members of this genus are generally planted for their leaves and size rather than for their flowers although the flowers are undeniably attractive. The newly formed leaves are highly colored and metallic in appearance and again in the fall they put on a colorful show. The leaves do turn green during the summer months but may retain streaks of red. The stems are strong, up to 30 inches, and support the large leaves. The plant does not require staking and even strong winds will not disturb it. The plant is hardy from zone 4-9.  While a late frost might toast the leaves, the cold does not fatally affect the plant and new leave are quickly produced.

While there is the possibility that that size of this plant has kept it from becoming popular it is more likely that its use has been restricted by required cultural condition. Its native habitat is along streams and shaded woodlands. It requires large amounts of water and the leaves will turn brown and dry if it doesn’t get sufficient moisture. Partial shade helps to preserve the attractive appearance of the leaves although the plant will grow in full sun with sufficient water. It prefers a rich humus type soil. Cool nights are preferred and give the plant a chance to rehydrate if the weather is very warm. Less than ideal conditions will keep the plant from reaching its full growth. This might be taken into consideration by the gardener with limited space but with a desire to grow the plant.

Propagation is by division in the spring or by seed. Apparently, the Rodger’s flower has 5 accepted species and many named cultivars. The plant crosses easily and there appears to be quite a bit of confusion as to just which plant is which due to this propensity. Pictures and plants are often

misidentified. Hybrids are common and often unintentionally produced.  The species closely resemble each other. Pinnata in particular produces different types of leaves at different stages of growth. A mature plant might have leaves that are different from a seedling. It might take several years before a plant produces its true leaf form. Unfortunately, the plants seem to be identified primarily by their leaf type. The two leave types that are seen in species of Roger’s flower are palmate leaves that grow out from a central point like the fingers on a hand and pinnate which grow in pairs from a central stem.  The plants can also produce variations of these two forms so accurate identification is difficult. Pinnata has pinnate leave but they are rarely produced in the classic configuration.

I planted my new prize in a damp section of the yard not far from a small stream that contains water only in the early part of the year. It is the drainage area of a spring. Mostly it will be getting morning sun and the area is large enough so that the plant can grow as large as it wishes. This area now contains some marshmallows (Althaea officinalis) which were originally grown from seed and have multiplied prolifically. There is a Ligularia stenocephala ‘The Rocket’ some ditch lilies (Hemerocallis fulva) and a nice stand of Siberian iris (Iris sibirica). There are also some native asters and more than a few weeds. It is an area that is in the process of being reclaimed and it is hoped that this new plant will thrive there.