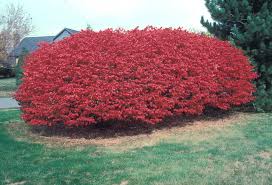 We received a number of burning bushes, both small starts and 6-8 inch plants, at the spring plant sale. This is a very showy plant in the fall and it might make an interesting bush to incorporate into some of our plantings. There are some things one should know about this shrub before planting it.

Burning bush is the genus Euonymus. The one that is most commonly sold and readily available in our area is Euonymus alatus. It has an open form with brilliant red/purple foliage in the fall. They are also planted for their “winged” stems and are often referred to as winged Euonymus. These attractive stems with their corky wings add interest to the winter garden when there is

little to be seen. They grow in almost any soil, in any conditions, and with little care. Burning bush is extremely hardy, thrives in zones 4-8 and is notorious for its toughness. It is salt tolerant and the deer don’t like it. It grows in full sun to full shade although bushes grown in the sun show the best color. Those grown in full shade will color later in the fall and may lose their leaves before full color is produced. The flowers are not conspicuous but they do produce a pretty capsule that opens to a reveal a red berry. So what is not to like?

Like many plants that were imported (Northeastern Asia, Japan and Central China) for their beauty and hardiness, burning bush has some disadvantageous. It grows into a very large plant. There are varying accounts of the size of the species plant but it has been known to grow to 20 feet in height and 8 feet across. The normal growth pattern of the plant is a multi-stemmed bush that expands outward as well as upward. Even if you use the lower estimates of size you are dealing with a 10 foot tall bush. There are cultivars that are supposedly smaller. Euonymus alatus `Compactus’ can expand to 10 feet tall and 15 feet across. The term “Compactus” allegedly referring to the wings on the stems rather than the height or spread of the plant. ‘Fire Ball’ is described as slightly smaller with a height and width of 7 feet. It is also supposed to be the hardiest of the burning bushes.

Can they be pruned? Certainly, but to keep them in control they would have to be pruned just as you would prune a hedge. That would mean taking the shears to them every spring. They do lend themselves to pruning into fanciful shapes or hedges as they grow quickly. Another option is to remove the bottom branches and encourage the plant to grow as a tree. Burning bush can also be “desperation” pruned by cutting it down to a stump. It is unlikely that this treatment will kill it and it will grow back in a few years. Planting burning bush where there is enough room for it to grow and spread to make a fantastic fall showing it probably the best option of them all.
Burning bush also tends to spread from the roots ,meaning that they can form thickets. This characteristic makes them dangerous to native species where they have escaped cultivation. They are considered invasive in a number of states including

Pennsylvania and New Hampshire has outlawed the sale of this plant. Burning bush also seeds prolifically and the seeds are planted hither and yon by birds who find the berries tasty.
It is difficult to say where one should stand on this sort of plant. Yes, kudzu (Pueraria lobata) is a dangerous invasive but it isn’t going to cause a problem in our area as it probably isn’t going to get through our colder winters. Purple loosestrife (Lyhrum salicaria) is indeed a problem and planting it is irresponsible. The list for Pennsylvania also includes dame’s rocket (Hesperis matronalis) and yellow flag iris (Iris pseudacorus) on the invasive species list. In some instances, under certaom conditions either can be invasive but normally they are just filling a niche where man has altered the environment and native plants have departed. While burning bush seems to be a problem in some areas, like kudzu, it may not present one in our area. The plants are here if you want them.