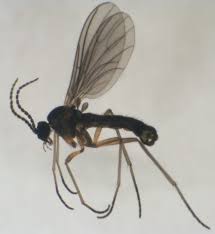 Let us contemplate the fungus gnat.  These delicate flies that resemble mosquitoes belong to the  Sciaridae, Diadocidiidae, Ditomyiidae, Keroplatidae, Bolitophilidae, and Mycetophilidae families of the order Diptera. Their size, 1/16-1/8 inch long, rarely up to ½ inch for some species, make It difficult to properly identify an individual without appropriate mounting and magnification. The adults are not strong fliers and are generally found near or on the soil, on leaves or on decaying matter.  Some of them are also the pesky gnats that dive bomb your face with the intent of committing suicide by drowning in fluid in your eyes. Various species have some other nasty habits but we will get to that later. Their life span is short, averaging only about a week. During that time the female can deposit 100-150 eggs on the surface of the soil.

The eggs hatch in about 4 days. The larvae, which go through four instars, remain in the soil feeding and growing for about 14 days and then pupate. After 3-4 days the new adults hatch. The larvae are only about 1/6 of an inch long and remain near the surface of the soil. They are next to invisible but in heavy infestations there may be slime trails on the top of the soil. A sliced potato on the surface of the soil will attract them should you want to verify their presence. This is also a way of getting rid of minor infestations. The potato slice can be destroyed along with the larvae and replaced until no more remain in the soil.

Fungus gnats outdoors are not generally any more than a nuisance. They feed on decaying organic matter primarily and are part of the cycle that keeps the environment clean.  While they will also feed on roots, they are rarely harmful to healthy plants. As natural predators keep them under control outdoors it is usually not necessary to take action. If they become a problem there are biological agents that can be introduced to control them.

Indoors they are more cause for alarm. Fungus gnats can invade houseplants. They are most likely to become a problem in plants that have a rich organic soil and are kept moist. Again, they aren’t going to cause much damage to a healthy, well grown plant but a heavy infestation can result in clouds of the flying insects invading the home. Usually, it is sufficient to let the plant dry out to control the larvae. The adults are attracted to the yellow sticky traps and they can be used if the flying insects become a nuisance. A layer of sand on the soil will often prevent the adults from laying eggs, as they will not lay on dry surfaces.

Where fungus gnats become a real problem is when seedlings became infested. This happened to me this year and before I realized what the problem was most of my seedlings had been destroyed. With seedlings the fungus gnats will eat of the small roots just after the seeds germinate. They leave nothing put a pair of tiny leaves and a piece of stem on the soil. This survives for a few days and then succumbs because of the lack of a root. Meanwhile, the unhappy gardener is wondering why his seeds are not germinating or are germinating so slowly. Since I grow my seeds in clear plastic boxes or in pots inside plastic bags the problem became apparent when I opened the containers to investigate. I was met with small swarms of flies. I tossed the most heavily infested containers, especially those of seeds that germinate quickly. Most of those had probably germinated and been eaten before I realized there was even a problem. Some of the boxes did have some germination and the tomatoes did not seem to have fared as badly as the cole crops. I opened these boxes to dry out the soil and sprayed them a solution of hydrogen peroxide that was 1 part hydrogen peroxide and 3 parts water. Insecticidal soap or a nicotine solution also works. The later can be made by soaking tobacco in water.  I sprinkled perlite on the soil as I had no sand. Sand is the recommended deterrent.  As I left the greenhouse I spritzed the air with a few sprays of an aerosol insecticide.

The contaminated soil was tossed on the compost heap with the expectation that the cold temperatures would kill anything left in it. This may not be the case as fungus gnats produce a natural antifreeze that allows them to survive through the winter.  Since the soil from the compost heap is used only in outdoor plants even if  they do survive hopefully there will not be a problem.

Fungus gnats will carry Pythium, Phytophthora, Rhizoctonia and Fusarium fungi which cause damping off. I may have lost a few seedlings to these as well but my habit of using peat moss in the soil and as a covering for the seeds usually keeps these fungi a bay. However, the excess organic material also unfortunately encourages the proliferation of the fungus gnats. Another causative factor was that the greenhouse got very warm during those 65⁰ days. Warmer temperatures speed up the hatching process.

After a few days the infestation seemed to have cleared up so I replanted. This time I used a potting soil that contained less organic material and was careful to use less water. The cole crops are already starting to germinate and some of the original planting are producing a few plants. There are always some seeds in a planting that do not germinate during the normal germination period. Usually the smaller plants get tossed. They will have their chance this year as their quicker germinating siblings were fungus gnat dinner. Hopefully, the plants will be ready for planting by the end of May. It is probably a good thing that Punxsutawney Phil was wrong about the early spring.