We’ve mentioned yellow herbaceous peonies in the newsletter before but just to refresh memories. These hybrids are an unlikely cross between the tree peonies and herbaceous peonies.  We say unlikely because taxonomically they are so far separated that natural crosses are next to impossible. In the early 1900’s an amateur horticulturalist, Dr. Toichi Itoh, began attempting to cross the two to produce a plant that had the colors and size of the tree peony flower with the hardiness of the herbaceous peony. After 20,000 failed crosses he finally recovered seed after crossing (P. lactifolia ‘Kakaden’) with pollen from a yellow-flowered woody plant (P. x lemoinei). This was in 1948 and the plants were not bloomed until the mid-1960’s. Dr. Toichi was long dead by that time but his widow continued the culture of his plants. They Ioh peonies were brought to the US in the late 60’s. They were extremely expensive until tissue culture techniques brought the price down. Both of mine bloomed this year. The fist is Canary Brilliants and the second Bartzella. 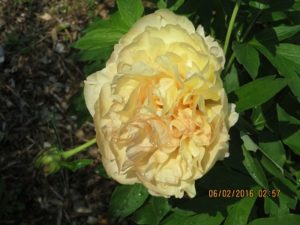 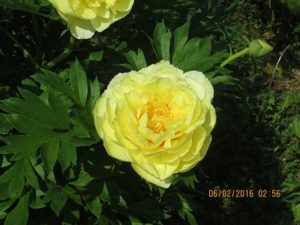