Sometimes we notice things in our gardening endeavors that are puzzling. In time the proverbial light bulb may appear over our heads and an explanation for the oddity presents itself. One of those eureka moments occurred recently. Several years ago I ordered seeds for a purple tomatillo (Physalis ixocarpa.) These tomatillos are much sweeter than the yellow variety and are like some sort of exotic fruit. When the fruit ripened there were an equal number of purple tomatillo plants and yellow ones. What? Human error? Carelessness? Time to find a new seed company?

Fast forward to this summer. I again ordered and planted the purple tomatillos. As usual, I had more plants than I could use so I sent 3 home with Linda. Only two survived the traumatic weather of the early part of the growing season. With only one plant left Linda said that her single plant was not setting fruit. We both checked out the flowers and found that they were complete or had both male and female organs. There didn’t seem to be any physical reason that the flowers could not self-pollinate except they don’t. There are a number of plants out there that do not self-pollinate because their own pollen is incompatible. There must be two plants for cross pollination to occur. While it is possible for one purple tomatillo plant to fertilize another, like many plants it is better if the pollen comes from another variety of the same species resulting in a larger crop. So now the mystery of why they ship different varieties of tomatillo seeds is solved. Also why Linda’s plant wasn’t setting fruit.

Which brings us to the subject of pollination. Pollination is necessary for the setting of seed and it can take place in a number of different ways but all flowering plants are either self-pollinating or must be cross pollinated with a certain number being able to use both methods. Pollination, no matter how it occurs, is a process of pollen from the male anthers being deposited on the female stigma.

In self-pollination flowers must have both male and female organs in close proximity so that the pollen is transferred without an external agent. This process is called autogamy. The flower of a bleeding heart never truly opens. The anthers and the stigma are enclosed in two inner petals so that the pollen falls on the stigma. Tomatoes are also often pollinated before the flower opens. Cross pollination in tomatoes may occur after the flowers open but it is at a fairly low rate both because many of the blossoms are already pollinated and the flowers are small and inconspicuous. Other plants that self-pollinate are some roses, beans, peppers and peas.

Some plants produce two types of flowers that are pollinated in different ways. Both violets and wood sorrel are capable of this. . One type forms underground and is self-pollinating. The second type, that is visible, is cross pollinated. While the latter provides the genetic diversity important to the adaptability of plants, the self-pollinating flowers insure that there will be a supply of seeds if pollinators are not present.

Geitonogamy is also considered self-pollination although it requires the intervention of an outside agent such as an insect. In this case the flower is pollinated by the pollen from another flower on the same plant or more rarely from the pollen of an identical plant. This maintains the genetic integrity of the plant in the same way autogamy does. No outside genes are introduced.  Geitonogamy is often an accident, as even the smallest most inconspicuous flowers will sometimes attract insects that will deposit pollen from another identical plant or another flower on the same plant.

What are the advantages of self-pollination? Each flower will most assuredly be pollinated so the plant has to produce fewer flowers. It need not expend energy on producing showy flowers or large amounts of pollen. The plant will be pollinated even if insects aren’t available or aren’t active. It can also extend its range into territory where pollinators may not be present. The plant  maintains genetic integrity. There will not be any change from generation to generation in those prized heirloom tomatoes unless man intervenes or a very rare cross pollination occurs.

Xenogamy or cross pollination is much more common in the plant world. This is the process whereby some outside agent be it wind, insects, bats or animals, transfer the pollen of one plant to the stigma of another of the same species. If a plant is to cross pollinate it must not only have a pollinator but must use some mechanism to prevent the plant from self-pollinating. Nature has devised a number of interesting ways of preventing a plant from self-pollinating.

One is pollen incompatibility as in the tomatillo. The stigma of a plant may receive many different types of pollen but it recognizes chemically only those of its own species and in some cases it will reject its own pollen. They simply do not accept self-pollination. Many fruit trees will not self-pollinate. Apples are a prime example of this. Pollen from the same tree will be rejected outright or will produce incomplete fertilization. To produce apples two different varieties of apple trees must be present.

A plant may time pollen maturity in advance of stigma readiness to prevent self-pollination. By the time the stigma is ready to accept the pollen the flower is no longer producing pollen. This is true of pecan trees.  Most geraniums actually shed their anthers or pollen producing parts before the female parts are mature as a barrier to self-pollination.

If you have ever wondered why the first blossoms on your squash plants never produce fruit you are viewing another way that plants prevent self-pollination. Those first blossoms only contain male organs and only produce pollen. The female flowers come later. These flowers are called incomplete and, depending on the species, a plant may contain both male and female flowers 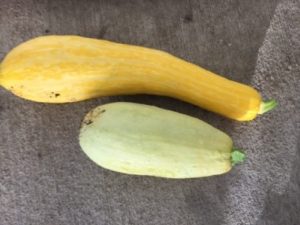 or the male and female flowers may be on separate plants. You must have multiple squash plants to produce fruit so that the pollen from one plant will be mature at the same time that the female blossoms appear on another plant. Squash plants are highly promiscuous and will cross readily with other varieties. The picture is from Claire. The white summer squash is a “volunteer” and quite different from anything she planted. I have a similar squash that also was apparently a case of cross pollination.  In plants such as the kiwi you must have both a male and female plant to get fruit. This is also true of the chocolate vine that is in our plant collection.

The anatomy of the flower is often instrumental in preventing self-fertilization. The main mechanism is the differing lengths of the stamen (male) and style (female) organs. If the style is extended outside the flower and above the stamen it is more likely to receive pollen from a visiting insect covered with pollen from another plant when it enters that receiving its own pollen when the insect exits.

Cross pollination provides genetic diversity. This is why if you grow plants such as bee balm and forget-me-nots for any length of time you get different colors from plants growing from seed.  It also allows plants to better adjust to their environment. The plants that have genetic characteristics that are adaptable to the environment survive and produce seed.

If a gardener understands the rudiments of pollination it often explains some of the mysteries that occur in the garden. No, your columbine did not change and become pink after a few seasons. The original plant died out and the seedlings that grew in its place are the result of cross pollination. . Knowledge prevents the kind of mistake that has the gardener purchasing and planting one single cherry tree and never getting any fruit. You can never know too much about what goes on in your back yard including the sex life of your plants.