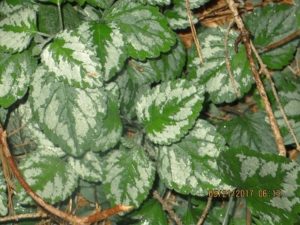 Serendipity is the art of happy accident. It is one of those made up words and was coined in 1775 by Horace Walpole. He first used it in a letter to a friend describing a fortuitous discovery he had made. The reference came from an old Persian fairy tale, “The Three Princes of Serendip”. The princes, while traveling disguised as common men, at the behest of their father the king, seemed to make many useful discoveries in no way related to what they were looking for due to luck or perceptiveness. Thus serendipity or lucky discoveries

There are a great many happy accidents that occur in the garden and if we are perceptive we don’t pull them as weeds or mow over them. Lamiastrum galeobdolon, commonly known as yellow archangel of false lamium, is the latest to occur in my yard. It appeared on a gravel covered bank on the area outside the greenhouse where the plant sale plants are heeled in for the winter. Perhaps it overgrew one of the pots, although we have no record of it, or maybe it was in an unlabeled pot and was tucked away for future reference or perchance it just grew.

Yellow archangel is a near relative of common dead nettle, Lamium  purpureum.   Lamiastrum galeobdolon was formerly known as

Lamium galeobdolon before taxonomists decided it might be a different genus.  Lamiastrum actually means “resembling Lamium”. The leaves of most varieties have the silver markings that give these plants another common name, aluminum plant.

Leaves may be toothed (dentate), scalloped (crenate) or resemble the teeth of a saw (serrate.)  While members of the Lamium genus have pink, purple or white flowers yellow archangel has yellow flowers although a variety known as ‘Silver Frost does sport pink flowers. The flowers are hooded with a lower lip like other members of the mint family. Galeob translates as helmeted. The plant flowers in May and sporadically thereafter. The stems are characteristically square as are other members of the mint family.

`Yellow archangel is generally used as a ground cover. The variety ‘Varigata’ is a slow growing, procumbent mat with the creeping stems radiating from the central plant. It is about 1’ tall with a spread of 1.5’  ‘Herman’s Pride’, the other popular variety, has a slightly lesser spread at 1’ and grows as a radiating clump. It can also be used as a border plant because of its more centralized growth. The plants are semi-evergreen to evergreen in the south but die back in the colder regions. Different varieties have slightly different growth habit and some are suitable for container and basket growing.

Yellow archangel is a good ground cover for partial sun to deep shade. It is a European import and is hardy between zones 5 and 8. . It does not tolerate full sun.  The plant allegedly likes well drained loam but currently it is growing in gravel with I’m not sure what underneath and seems to be quite happy there. Research suggests that this plant will tolerate most conditions and soil. It will grow under occasional drought conditions, in moist soil and isn’t fussy about pH. It tolerates heat. Optimum growth seems to take place in rich soil in full to partial shade. As with many ground covers it may not be wise to provide optimum conditions for control purposes.

Yellow archangel can become a problem. While propagation is by division or stem cuttings the stolons can and do root. It also spreads by seed. Plants that are removed should be destroyed by placing them in plastic bags and discarded. Tossing them on a compost heap or by the wayside can result in an infestation. These plants are best planted in an area where their spread can be controlled by mowing or barriers to excessive spreading.

I believe that we have the ‘Varagata’ variety of the plant. There are several plants in the plant sale this year and there will be more in years to come. Hopefully, it will not cause any problems where it is growing and it is welcome for its pretty flowers, attractive silver patterned leaves and its graceful growth habit.