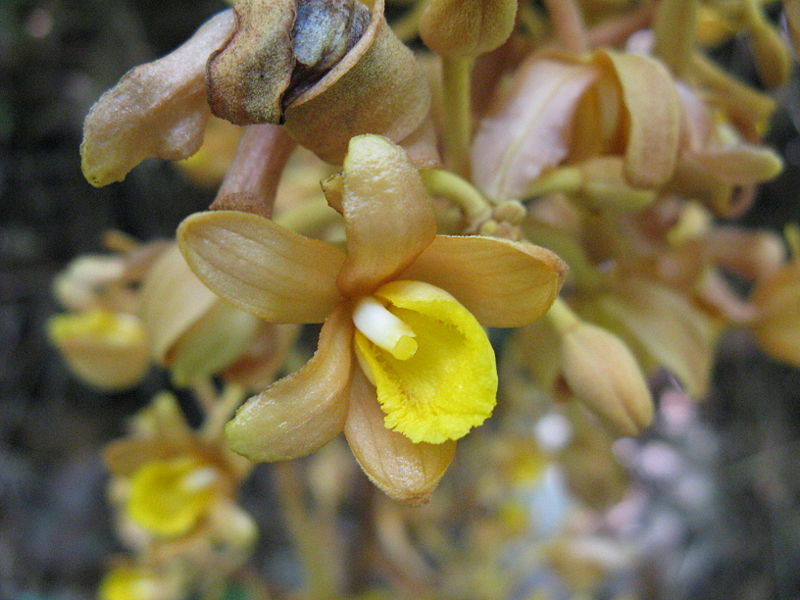 Saprophytic plants are not unusual in nature. These are plants that live off of dead and decaying matter. They cannot make their own food as they contain no chlorophyll and cannot photosynthesize. Most of them are found in defined locations since they have a very specific arrangement with their environment. While some such as mistletoe are parasites directly on the photosynthetic source such as a tree, others require the intervention of a fungus to obtain nutrients. The fungus gets its nutrients from the tree and passes on those nutrients to the saprophytic plant. The exact arrangement is not always understood and every saprophytic plant has not been extensively studied. Indian pipes (Monotropa uniflora) is an example that grows in our area and throughout most of the US. These ghost like plants get their food from conifers via a mycorrhizal network that connects them to the tree. With such a specific environment needed for survival these plants obviously cannot be grown as garden plants nor can they be successfully transplanted. For the same reason they are not cultivated or sold.

There are some orchids that are saprophytic, as well. Cyrtosia septentrionalis is one such orchid. It receives it nutrients from a fungus known as Armillaria, whose common name is honey fungus. This mushroom lives on either live or decaying wood. Curiously, this mushroom is the one that is picked locally by many of us who enjoy them in the fall. Cyrtosia septentrionalis has never been grown or seen in the US. Recently several of the plants were found growing at Longwood Gardens.

Their appearance has puzzled the staff at Longwood Gardens. The plant has never been planted in the gardens nor has any attempt been made to grow it according to written records. Since it cannot be cultivated it is impossible to acquire the plant commercially. Speculation is that the seeds were brought in on the roots of plants that were imported from Japan. Supporting this theory is the fact that the concentration of plants is near the experimental greenhouse and is confined to a limited area between roads. There have been 10 clumps of the plants spotted over a widely scattered area. The size and the multiple flower stems suggest that the colonies have been there for some time and are thriving.

The normal means of seed dispersal is birds. The plant produces a bright red, fleshy seed pod that contains some of the largest seeds in the orchid family. These are eaten by birds and the seeds are scattered via their excrement. Curiously, the squirrels seem to be doing the job at Longwood. Staff are carefully monitoring the plants and they see no evidence that local birds are interested in the seed pods. The squirrels however find them tasty.

It was these bright red, banana shaped seed pods that led to the discovery of the Cyrtosia at Longwood. In June of 2018, Longwood’s Director of Library and Information Services, David Sleasman, spotted the plant along a maintenance access road. He brought it to the attention of the botanists on the staff. The flowers are the yellow brown combination of many small flowering orchids. They are attractive but inconspicuous against the forest floor and there are no leaves as the plant does not photosynthesize.

Having passed on the official conjecture as to how the plant arrived at Longwood Gardens I will speculate as well. Some plant person, either official on amateur, came back from Japan with a few seeds in his pocket. We all know how that is. He spotted the honey mushrooms growing in that area and was sufficiently knowledgeable about Cyrtosia to know that it grew in conjunction with that particular fungus. He tucked in the seeds and went on his way smiling. It is what plant people do.