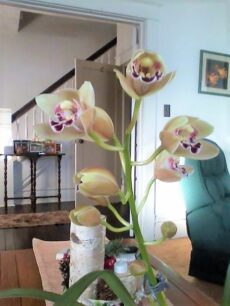 Pat sent us a picture of a couple of her orchids that are magnificently in bloom. The one orchid has 10 blooms and the other had 15. They are both of the genus Phalaenopsis. These are called moth orchids. They came by this common name in a curious way. It is in reference to the butterfly shape of the flower that the term was first used. It was initiated by Swedish Naturalist, Peter Osbeck, because apparently he could not focus his binoculars. On a visit to Java, in the in the middle part of the 18th century, he thought he was viewing a cluster of moths. When he finally got his binoculars focused he discovered that he was actually viewing blooming orchids. He dubbed them moth orchids.

Phalaenopsis are supposed to be the easiest orchid to grow in the home. This is because they tend to enjoy the same living conditions as people. A daytime temperature of 72 degrees F will keep an orchid happy. A drop in temperature at night will induce flowering. They are happy with low light and watering once a week unless it is extremely hot.

Research by Ohio State University and the University of Georgia validates the “ice watering” theory advocated by some plant breeders. Orchid buyers will frequently find plants labeled “ice orchids.” This refers to the suggested watering technique of placing 2-4 ice cubes on the growth medium rather than watering. This trickle down method prevents the water from running through the fast draining bark in which the orchids are planted.

According to researchers this method results in the same “flower longevity, display life and root and shoot health as those watered with traditional methods.”
Phalaenopsis come in just about every imaginable color. The pinks and whites are the most common but they come in shades of lavender, yellow, red, orange and even shades that are called green but are just an off yellow. The hybrids can be spotted, patterned and even have fine stripes. But beware the blue orchid. These are dyed. Also the very green ones are probably dyed as well. These plants will revert to their original color when they rebloom

There are a couple of different ways that orchid flowers are dyed. This is usually done with a white orchid commercially although some exotic results can be achieved by using pink or lavender orchids. Food coloring is either injected into the flower stem or placed in the water when the plant is watered. The dilution of the food coloring depends on how dark a flower is desired. The injection technique provides results in about 24 hours. It might take a bit longer using the watering method. Supposedly, this will not harm the plant although it might shortened the lifespan of the blooms. For the longest lasting flowers it should be done while the flower stem is in bud and just about ready to bloom.