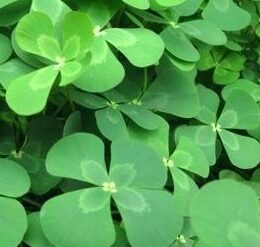 Say the word fern and people instantly conjure images of a green, feathery plant that is, well,…… ferny. But of course, the typical ferny leaf is but one body design used in this ancient and extremely variable group of plants. One of the oddball ferns, the water clover (Marsilea mutica), looks like your typical lucky four-leaf clover but in fact is one of the older fern species. Pat brought this plant to our attention under the name 4 leaf clover plant. It is also called naardoo by the original inhabitants of Australia where it originated.

The 4 leafed clover plant is a water fern and a very unusual plant. It belongs to a group of ferns that are purported to date back 300 million years at the approximate time that the single continent began to divide into the land masses we know today. Subsequently, this plant is found on every continent except Antarctica. What differentiates Salviniales from the rest of the ferns is that they produce both male and female spores where other ferns produce a singe spore which contains both male and female components.

Water clover grows in mud at the edges of ponds or streams. It will venture into water that is no deeper than 18 inches. The rhizomes spread the plant along the muddy bank. The nodes on the plant stem produce a leaf on a stem which terminates in a floating frond. This frond is sterile and never produces spores. The spores are produced on the components growing on land and then only when drought causes the mud to dry up. They are encased in a sporocarp, the hard brown structure that any one who has grown ferns has seen on the underside of the fronds. In the case of water clover these structures are much larger, up to a third of an inch long, and are made up of a water absorbing starch that is designed to get the plant through periods of droughts. It is believed that the spores can remained viable for 100 years encased in this material. When water becomes plentiful the starch absorbs it and the spores germinated.

Water clover is said to be somewhat finicky as to where it grows. It will tolerate full sun to partial shade and. of course, needs an adequate water supply. It is frequently grouped with bog plants. The plant is hardy to at least zone 7 and possibly to zone 5. There is some controversy as to its hardiness. It reaches a height of 6-12 inches. Since it is a true fern it does not bloom. The leaves however are very attractive.