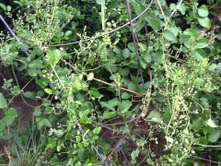 Weird things happen in the garden and it is never safe to say a plant is gone unless you have paved over the area in which it grew. Currently, I have two rather vigorous vines growing in my garden that I didn’t plant there. They appeared last year or at least that is the first time I noticed them. It’s a jungle out there and these vines were coming up through bushes. I started to weed them out but decided that I liked the look of the leaves. One was conveniently growing up my Miss Kim lilac that was slowly succumbing to overly damp conditions brought about by a change in the guttering system from the roof. The other had positioned itself in front of an azalea bush which was providing it support. So they grew through last summer without much attention.

They appeared again this year and now I had to pay some attention to them because they were about 10 feet tall. I continued to guide the one vine up the now dead lilac and stuck in a tall tomato cage for the other one so it wouldn’t strangle the azalea.

Early in the year I thought that they had the look of clematis but comparison with other clematis leaves didn’t provide a match. The leaves were small and appeared in groups of threes and the base of the vine, at least, was woody. The rest of the growth was supple and rather delicate .I’d had clematis vines growing near the porch but they had never done well and certainly had never bloomed. After a couple of seasons they disappeared without ever getting well established so it seemed unlikely that they had suddenly reappeared 4 to 6 feet from where they were planted.

Right now both vines are covered with white buds and I’m guessing they are sweet autumn clematis or Clematis terniflora. (If anyone has any other thoughts let me know.)Years ago I did have autumn clematis in that area but whether these are seeded from that, I cannot say. It was quite beautiful for about 3 years and then disappeared. While it bloomed prolifically it does seem doubtful that the seeds would have stayed viable for the many years that have passed since it was last seen. Still I cannot imagine where else it could have come from.

This variety of autumn clematis is a Japanese import which can be very invasive. Our native clematis is called virgins bower or Clematis Virginiana which is not as prolific a grower.  Autumn clematis produces a great many seeds and they do germinate readily. There is the possibility that the seeds came in with another plant and found the area to their liking. Where ever it came from, at the moment I am quite happy with it.

Since it blooms on new growth I will be pruning these vines heavily in the early spring. This will both keep them under control and provide for lots of blossoms. I’ll let it go to seed, not only because the seed pods are attractive bits of fluff, but a few extra plants of this pretty vine would be welcome.  If it does take over the entire area like kudzu .to which is sometimes compared, I may regret that decision.