While there is a growing trend to appreciate our native plants, most of us are still labeling them as weeds and vigorously uprooting them. Part of the reason that we don’t appreciate their beauty is that they are marginalized. We allow them to grow in areas that that we aren’t interested in for our more exotic choices or places where it is difficult to mow or weed. A plant that is growing up through the bricks in a pathway or under a bush is never going to reach its full potential. If it has to scramble for sunlight or compete with close growing plants for water it just isn’t going to compare in shape or flower production to those plants that are pampered in the garden.

What we have in the following picture is a “weed” that grew as beautiful as anything that came from a nursery or garden center. It is a narrow leafed willow herb or bog willow herb. Its taxonomic name is Epilobium leptophyllum and here is its story.

Several years ago we took down some old white pines leaving an area that now gets enough sun to actually grow something other than scraggly grass. The goal  was to mulch it and put in bushes and specimen plants. That was the plan but with lots of odds and ends of plants around it was inevitable that some of them got tucked in between the more permanent collection….temporarily, of course. Some of them were unknowns either in variety or color and they 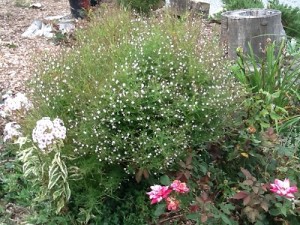 were duly labeled with what information that was available. This plant sprung up beside a tag that said, “Unknown from John”. It didn’t really look like what I remembered putting in there but the spot was empty and its airy leaves made a nice contrast to the roses growing around it. Later it served as a Japanese beetle lure keeping them off of the roses. And then it bloomed. Reminiscent of baby’s breath, its delicate pink flowers were a joy to behold. At that point Norton’s Wildflower Guide came out and I was able to identify it.

Epilobium leptophyllum is native to Pennsylvania and much of the rest of the U.S. It is hardy in zones 2-6 and is considered a good plant for cool situations. As its name, bog willow herb, implies it prefers wet feet. It will grow in a consistently damp area but will not tolerate dry conditions. It thrives in nutrient poor soil in marshes, bogs, wet meadows, beside streams and is found it areas that have been burned off or otherwise disturbed. As long as the soil doesn’t dry out, it tolerates sand, clay or average soil types with a pH of 4-6.5.  Willow herbs like full to partial sun.

The plant, in good growing conditions, forms a multibranched sphere that reaches 2-3 feet in height.  The leaves are 1/16th to 1/8th wide and range up to 2 ¼ inches in length and, like the stem, are covered in almost invisible hairs. The allover color of the plant is a grey green. It makes a nice contrast to the greener foliage of the plants around it.

The flowers are tiny, about ¼ inch across and rise out of the leaf axils on short stocks. They can be pink or white and have four notched petals. The plants usually bloom in mid to late August. The flowers are followed by a seed pod that is about 2 inches long and very slender.  The seeds emerge on a puff of fluff like a dandelion and are carried by the wind.

Bog willow herb spreads and is propagated by stolon. It is fully hardy in our area but it grows slowly and is not likely to become a big problem. The seeds however are another matter. They germinate readily without any treatment other than finding a damp location. If you grow this plant it would probably be advisable to remove the seeds before they ripen. Like many hardy perennials that reseed easily, beheading the plant after it flowers saves weeding and doesn’t do any damage.

Try giving some of our natives a chance. Many of the characteristics that condemn them such as rangy growth and minimal flowering can be reversed by giving them the same care you would give any garden plant. Plant them in the proper environment, feed them and prune them and they will reward you by putting on a show that rivals anything you buy in a nursery.