As the growing season comes to an end the gardener must make a decision as to which perennials should be cut back now and which should be pruned in the spring. There are a number of reasons to cut back plants in the fall. Plants which are prone to mildew or other bacterial or fungal diseases should be cut back after they are done blooming if the malady is present. This allows for the disposal of diseased foliage in which harmful organisms might over winter. Do not compost diseased cuttings. Dispose of them in the trash or put them in black plastic bags and leave them in the hot sun.

Phlox (Phlox paniculata) and bee balm (Monarda sp.) are two plants that are prone to mildew even if the cultivars are bred to be resistant. Bearded or German iris (Iris germanica) should be cut back late in the season so that the foliage doesn’t provide a haven for iris borers.  After a freeze the foliage of hostas (Hosta sp.)will collapse. This provides an excellent hiding place for slugs and

other insects so cutting them back is advisable if slugs are a problem. Cut to about two inches above the soil line. Selectively prune peonies (Paeonia sp.), removing any diseased foliage. Peonies are also susceptible to mildew. Helenium or sneezeweed is another plant that should be cut back after it blooms to prevent the spread of mildew. If you grow asparagus get rid of the foliage in the fall as it harbors the asparagus beetle.

The cell walls in many plants will burst when the temperature goes below freezing. The plant will then have no structural support and the leaves turn to mush. The leaves or the entire plant will fall on the plant crown where the retention of excessive moisture can cause crown rot. In plants like hostas and bergenias (Bergenia sp.) the leaves cause the problem. In plants like penstemons (Penestemon sp.) the entire plant will collapse. Plants that turn to pulp after a hard freeze should be cut back to allow the crown of the plant to dry.  Yarrows (Achillea sp.)do not like dampness at their crown so they too should be pruned back. The foliage of painted daisies (Tanacetum sp.)will act as overly wet mulch through the winter if it is not removed. Cut back blackberry lilies (Belamcanda chinensis) and candy lilies (Pardancanda norrisii) for the same reason.

Plants that reseed prolifically can be pruned right after they bloom or before the seeds ripen to prevent a million seedlings from growing. Cutting the entire plant back is less time consuming than deadheading and will sometimes result in a second round of flowers. The first pruning should 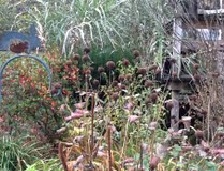 remove 1/3 to ½ of the plant and later the plant can be pruned to a few inches above the ground. Purple coneflowers (Echinacea purpurea) are best handled this way. If you don’t want black-eyed-Susans (Rudbeckia hirta) to reseed they too should be cut back, although he birds will appreciate it if the seeds are left in place for the winter. If you grow native plants, such as goldenrod (Solidago sp.), they too should be cut back to prevent the seeds from forming. Some of the newer goldenrods do not present this problem and can be left through the winter to provide some form to the winter garden.

Another reason for cutting back plants in the fall is aesthetics. Many tall plants such as baptisia or false indigo (Baptisia sp.) will flop over or split.  If they are beside a path or another plant they can be a nuisance. They can be staked late in the season or they can simply be cut back.  Any plant that is overgrown or responds to frost by turning black or falling over can be cut off to keep the garden neat. . Plants such as centaura (Centaurea montana), rose campion (Lychnis coronaria) and spiderwort (Trandescantia) should be cut back after blooming. They will form new basal foliage that is more attractive than the over grown plant. They may also flower again. If a plant is ugly and it doesn’t actually hurt it to prune it in the fall get rid of it.

Plants such as the perennial sages (Salvia sp.) and catmint (Nepeta cataria) that have been sheered repeatedly all season can be cut back again.in the fall.  The shorter foliage is less likely to be winter damaged and the plant will need less pruning in the spring. The new basal growth will also protect the roots better than taller foliage. Golden margarites or Anthemis tinctoria should also be cut back to encourage new basal growth. There are many plants that respond with increased vigor to severe pruning

The major reason for leaving foliage on a perennial through the winter is to protect the crown of the plant from freezing.  Not only does the foliage act as mulch but it traps and holds snow to further insulate the crown. Plants may be root hardy but if the crown is damaged too severely the plant will probably not survive the winter. . All of the tall grasses should be pruned in the spring for this reason. Torch flowers or red hot pokers (Kniphofia uvaria) may be trimmed but should always have some of the foliage left in place for winter protection. While most types of hostas do well with the removal of the leaves in the fall, some types seem to suffer from spring frosts if the leaves are removed. Leave the foliage on butterfly weed (Asclepias tuberosa), as well. Mums should also be cutback in the spring so that the plant crown is protected through the winter.

A number of perennials, even in our climate, are evergreen or semi-evergreen. They continue to produce roots through much of the winter so should not be pruned until spring. This group includes hellebores, some dianthus and bear’s breeches (Acanthus spinosus). If the winter isn’t too cold some of the coral bells (Heuchera) will retain their leaves through the winter. They should be cut back in the spring to encourage new growth and the best color. Some daylilies can also be evergreen and continue to produce roots very late into the season. All that should be done in the fall is the removal of dead flower stems and brown leaves. Below are two pictures of daylilies at this time of the year in our area. The first is an evergreen daylily. The second is one that isn’t. 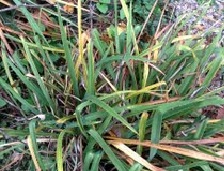 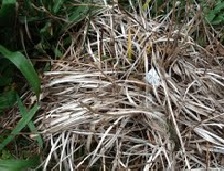 Fall pruning encourages plants to produce new growth. While this is a positive thing in plants that need the protection because of cold sensitive crowns it is not a desirable thing in plants in which the new growth is cold sensitive. The formation of the new leaves can deplete the plants resources without providing any advantage to the plant.  This wasting of stored food can result in the death of the plant. Artemesias are prone to this type of problem and should be pruned only in spring.  Wait until spring to prune lavender (Lavandula sp.)  as the new growth is very cold sensitive. Lavender is a difficult plant to overwinter if drainage isn’t good… Bellflowers or campanulas should also be cleaned up in the spring as they are another plant in which the new growth is susceptible to colder temperatures.

Leave winter foliage on plants that come up late in the spring so you don’t accidently lose them. Balloon flowers (Platycodon grandiflorus) are often hard to find in the spring. Butterfly weed comes up even later and is often planted over or dug up. Markers have a tendency to disappear through the winter and the best way to locate a plant is to have a visible presence. Cut back the dead parts when the plant is relabeled or resumes growth.

Spring is the best time to prune plants that you want to reseed. Liatris ( Liatris spicata) will often not survive the winter but it will replace itself with seedlings. Lance leaf coreopsis (Coreopsis lanceolata ) and blanket flower (Gaillardia) will also reseed. Don’t clean up annuals in the fall and they will often replace themselves in the spring. Pansies and snapdragons are prolific seeders and many people think alyssum is a perennial. The seeds of black -eyed Susan, purple coneflowers and various thistles are appreciated by the birds.

Most of the pruning rules are generalizations and open to interpretation in different situations and are subject to the amount of time the gardener has. Who prunes irises? Hostas are a judgment call. I never cut them back until spring, although if the winters continue to be warm it may be better to do so. Pay attention to the plants that need to keep their foliage to protect them through the winter  and watch out for those plants that don’t like to be pruned too late in the year and all should be well.