Most gardeners are familiar with powdery mildew.  This is the white patchy fungus that shows up on phlox and bee balm late in the season. We also see it on squash and occasionally on tomatoes.  Among the annuals zinnias are particularly susceptible. In severe cases the leaves become distorted, brown and drop off. It thrives in conditions of high humidity, infrequent rain and shade. This is why the bottom parts of the plant are most often affected first. As water washes off the spores and sunlight kills them the most severe damage is often in these protected areas. 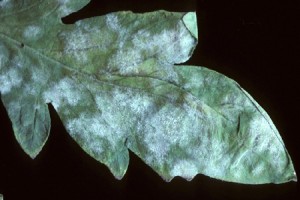 Mostly, I think, we learn to ignore powdery mildew. It doesn’t seem to show up in our area (its behavior is different elsewhere) until after the plants have bloomed and it doesn’t usually kill those prized perennials. It is a number of different fungi in the Erysiphales family that cause similar symptoms on different species of plants so there is not specific cure.  While there are some broad range fungicides and other treatments, plant experts suggest choosing varieties of plants that are less susceptible to mildew and practicing good cultural techniques. These include frequent overhead watering and thinning plants to allow good air circulation. Planting in bright sunlight for plants that tolerate it is also advised.

While using chemical treatments might improve the appearance of the plant on a short term basis, powdery mildew is not going to be eliminated by these treatments. It overwinters in our area and will be back next year.  The spores and mycelium overwinter in living plant tissue and in the spring the spores will be borne on the wind to infect your plants anew.

We recently received a bulletin from the County Extension Service which describes another type of mildew that has been causing problems as a result of an unusually warm winter and early spring.  It apparently came in on greenhouse grown impatience and many gardeners who bought them have described similar symptoms.  The bottoms of the leaves have a fuzzy growth and the tops often have distinct yellow areas. The leaves then turn completely yellow and start to drop. The plant is eventually reduced to a single stalk and dies.

This is downy mildew and it is caused by a number of different fungi in the genus Peronospora, or Plasmopara. It is generally a greenhouse problem as it thrives in cool (58 -72 degrees F) damp conditions. The spores require water to germinate and infect the plant.  The thin coating of water left on the leaves by overhead greenhouse watering systems provides an ideal environment. Condensation is also a culprit in the greenhouse. 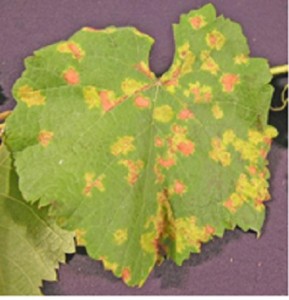 Unfortunately, by the time infected plants have reached the market it is too late to treat them. Bag and dispose of infected plant material so the disease doesn’t spread. All impatience plants except the New Guinea ones are susceptible. Other annuals that are vulnerable to this condition are and snapdragons, pansies and salvia, although they are probably not infected by the same species of downy mildew that came in on the impatience.

To prevent the spread of downy mildew water plants in the morning or do root watering so that the leaves don’t stay wet for a prolonged period. Splashing can spread the fungus. The fungus can be carried by seeds so don’t collect seeds from infected plants.

Downy mildew is unlikely to survive our winters, so it should not be a problem next year. Unless, as Allegheny County Extensions suggested, it “is blown north on the wind” from the southern climes where it does live through the winter.  Personally, I’m not buying this explanation as the spores have a limited life span. If you’ve got it go yell at your plant vendor rather than shouting at the wind.