A number of northern gardeners lost impatiens during the last growing season due to infected plants that were greenhouse grown or came in from the south.  Typically impatiens (Impatiens walleriana) exhibited yellow leaves, which turned brown and dropped. Fuzzy, white patches were visible on the bottoms of the leaves before the leaves disappeared. Ultimately, the plants experienced total collapse and death.

The disease was easily spread from plant to plant via water splash and wind. In most cases the plantings were lost because fungicides are not effective once an infestation occurs. Identification of the disease was difficult as most area gardeners had not seen it before. Fungicides will protect a plant before it is infected although technically the infecting organism is not a fungus.  Fungicides that were applied to the plants at their point of origin would have lost their protective abilities by the time the plants arrived in garden centers. Under cool, wet conditions any spores that were present would begin multiplying and by the time they plants were planted in pots or in the ground it was too late to gain control of the disease.

The downy mildew (Plasmopara obducens) that caused the problem is not something that is normally found in northern gardens. It is an organism that is 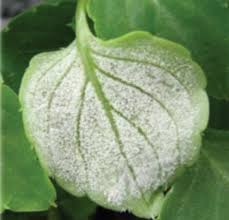 prevalent in greenhouses and is increasingly becoming a problem in the south. The mild winter of 2012 and the early spring encouraged the overwintering and the proliferation of the spores in both greenhouses and southern climates where impatiens plants are grown for the northern market. It is thought that milder conditions allowed the spores to overwinter in areas further north than they usually can survive.

So what can we expect for 2013? The movement of Plasmopara obducens has not been studied since it is a relatively new problem. The spores of a similar downy mildew that attacks cucumbers and their relatives have been known to travel 600 miles in 48 hours riding wind currents and storms coming in from the south. If again there is a wide spread problem in the south, not only will northern gardeners have to beware of contaminated plants but healthy plants may become infected from wind born spores.

Ordinarily spores of downy mildew will not survive in the soil in northern climates. However, gardeners are being warned that an encapsulated, more resilient spore may be able to survive in debris overwintering in the garden. If you pulled up your infected impatiens and sealed them in plastic bags for disposal your soil may be clean. If you tossed the plants aside or plowed them under the disease may reoccur in the current planting season.

Penn State County Extension is advising that impatiens not be planted in soil that contained infected plants last year. Since P. obducens is specific to our common impatiens it will not attack any other plant that is grown in the contaminated soil. While experts are not sure how long the spores may survive, they are suggesting that they may be present for 5-8 years in garden soil. If infected impatiens were in planters bag the soil and dispose of it or remove it to a location away from the garden.  Other county extension services are suggesting not planting impatiens at all this year.

New Guinea impatience may be safely planted as they are highly resistant to downy mildew.  SunPatiens® a new hybrid is also immune. Begonias and coleus are good choices for those shady areas where the old standby impatience are normally planted.