•Suitable for a wide range of climatic conditions

•Readily available in the year of release

is Polygonatum biflorum. Native Solomon’s seal is not an uncommon sight in our woods, blooming in the spring with small white lily of the valley type flowers.

This domestic version of Solomon’s seal has light green leaves with white tips and borders. The stems are arching and non-branching. The plant reaches a height of 18-24 inches and forms non-dense colonies. The oval leaves turn bright yellow in the fall. It grows from a massive jointed rhizome that is easily divided in the spring or in the fall. The flowers appear in late spring and are a greenish-white, very similar to the native variety. They have a sweet odor and this plant is often called fragrant Solomon’s seal.  Blue/black berries often form after the flowers fall away.

Variegated Solomon’s seal is an ideal plant for the shade garden. It will grow in

full shade to partial sun and provides year round interest in those shadowed areas. It prefers moist, well drained soil but will tolerate much dryer conditions when it becomes established. This is one plant that seems to grow well under white pines. As might be expected, it prefers an acidic soil. It is quite hardy having a range of zone 3 in the north to zone 8 in the south. Variegated Solomon’s seal is pest free and in generally not attractive to deer, rabbits or groundhogs. It is, however, very attractive to birds, bees and butterflies.

Variegated Solomon’s seal works well with a number of plants that favor shady locations. Hostas are a good companion plant, especially in a garden that is devoted to plants whose leaves are the prime focus. It looks well with ferns, contrasting a more robust form with the delicate fronds of the ferns. It can provide a background for the more colorful huecheras and does well with astilbe…

The common name Solomon’s seal (Sigillum Solomon’s) is an interesting one and one that would seem to have a biblical origin. This isn’t the case… There are several suggestions as to how the name originated. The rootstalk or rhizome, from which the leaf stalks grow, is very near the surface of the soil. When the leaves die back in the fall they leave a distinctive scar on the rhizome. This is thought to resemble the blobs of sealing wax that were used to seal correspondence before the advent of self-sealing envelopes. The Solomon part of the common name is said to come from either the fact that the term “Solomon’s seal” is not an uncommon term in various folk tales or that it comes from the tale that King Solomon put his seal on the plant for its medicinal value. An alternate explanation is that it is so named because of its use in sealing up wounds and broken bones.  It has also been called St. Mary’s Seal. (Sigillum Sanctae Mariae.)

Solomon’s seal is a medicinal herb and can be quite legitimately planted in an herb garden. The plant is said to stop bleeding and knit bones. It has also been used to heal bruises. According to  John Gerarde (1545 – 1611), a noted herbalist,  “The roots of Solomon’s Seal, stamped while it is fresh and greene and applied, taketh away in one night or two at the most, any bruise, blacke or blew spots gotten by fals or women’s wilfulness in stumbling upin their hastie husband’s fists, or such like.”  According to Culpepper’s Complete Herbal, Solomon’s seal makes an excellent cosmetic for the complexion.  It is unclear whether Culpepper is referring to those “blacke or blew spots” gotten by female clumsiness to which Gerarde alludes.

The status of perennial plant of the year usually indicates that plant is easy to grow and carefree. This one certainly qualifies and has the added bonus of growing in dry shade. There are very few plants that are designated for shaded areas that are dry due to competition from trees or are naturally dry. This alone makes variegated Solomon’s seal a valuable plant. 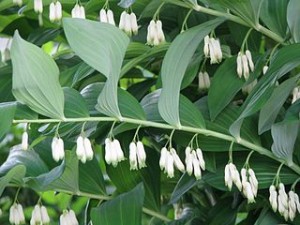