Sometimes plant names are confusing and, in that confusion, we overlook flowers that are real gems. Most gardeners are familiar with sweetalyssum (Lobularia maritima syn. Alyssum maritimum), Lobularia being the more modern nomenclature. This is the small flowered ground cover that comes in shades of white to light purple. It is an annual or very short lived perennial and is often found as filler in hanging baskets. How many of you, however, have ever heard of yellow allysum?

same conclusion because, while both plants were once in the genus Allysum, they have since been placed in different genera. Yellow alysum once Alyssum saxatile, is now Aurinia saxatilis. The confusion has arisen partially because no one seems to pay any attention to these changes. My second though was that while it was a very striking plant it looked very similar to wild mustard at least from pictures. Wild mustard (Sinapsis arvensis syn. Brassica kaber) and yellow allysum both belong to the family Brassicaceae, where you also find the cabbages and broccolis. Wild mustard is a noxious weed and yellow alysum can also be a problem but it is certainly much prettier.

Yellow alyssum is a spreading, mat forming perennial that reaches a height of about 6 to 12 inches. The plant has two types of leaves, larger basal leaves and smaller stem leaves. The leaves are a soft slivery grey. The plant produces bright yellow flowers in the spring with many small flowers per stalk. One of the most common cultivars, Aurinia saxatilis ‘Compacta’, bears the common name Basket of Gold and, planted in drifts, the plants bear a striking resemblance to gold filled baskets.

Yellow alyssum is commonly used as a rock garden plant or as a covering for low walls. Its name is from the Latin “aurinia” meaning golden and 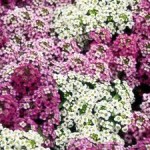 “saxatilis,” which translates as “found among rocks”.
The plant comes into its own on those sunny dry banks, slopes and mounds that are often a result of backfilling around houses or various other projects. This plant thrives in poor soil in dry areas. It is tough enough to take the strongest sun that zone 5 can produce. It spreads well and its thick growth habit keeps down weeds. Sheering it back by half after blooming keeps it compact and may result in a second waver of blooms. What it will not tolerate is heavy clay or poor draining soil. It will rot in conditions that are too wet.

Yellow alyssum is a spring blooming plant and, when planted indoors, it may be sown 8 to 12 weeks before the last spring frost. It prefers cooler temperatures for germination, 50-70 degrees F, and will emerge in 2 to 4 weeks. Plants should be set out or thinned to 16-24 inches.

Bluestone Perennials carries the cultivar ‘Gold Dust’ as a plant. The seeds for a shorter version ‘Compacta’, which is actually Basket of Gold, can be had from Parks. Harris Seeds carries the same variety and it is often seen in seed racks.

The flowers are the favorite of butterflies and bees and deer do not find it particularly tasty. Yellow alyssum is also known as madwort as it was once used to treat rabies. It also has been used as a calmative agent and to treat hiccups.

Anyone who is interested in the confusion issue can go to

http://arnoldia.arboretum.harvard.edu/pdf/articles/1628.pdf and get the straight scoop from the Bulletin of Popular Information of the Arnold Arboretum, Harvard University. I was amused to find that I wasn’t the only one confused by this pseudo-alyssum. I found at least one seller who was selling sweet alyssum with a considerable amount of information that was accurate only for yellow alyssum. Harvard, however, will get you straightened out but be sure to a cup of coffee at hand, maybe a doughnut or two. You will need the stimulation.

In a perennial border this plant can be used with spring flowering bulbs. It is striking with red tulips and purple grape hyacinths.  It is also effective and shares similar cultural requirements with creeping phlox. As with most perennials bloom  time differs with placement and climate. It often takes several seasons to discover what will bloom at the same time.

Although yellow alysum can be started from cuttings and divided the most common way of starting it is from seed. It may be planted outdoors, 2-4 weeks before the last frost. In our area that would be anytime during the first week of May. It can also be planted in the late summer or early fall.