What excites a gardener˜ How about something unusual popping up in the garden. We all, except for the most or ruthless of us, plant things with little or no expectation that they will grow. We tuck in the odd Easter lily, that gift mum and the pretty potted azalea that we are fairly certain is a florist’s azalea. In they go and are promptly forgotten. A couple of years ago Monica got hold of a number of those packets of wildflower roots and bulbs and was kind enough to share them with me. Among some Trillium grandiflora, Jack-in-the pulpit and a few other things that are native to the area were two yellow trillium

Trillium lutea while hardy between zones 4 and 7, is not native to northern Pennsylvania. Its native range is the south eastern United States, primarily in Tennessee, North Carolina, Georgia, and Kentucky. T. lutea is a woodland plant and requires similar conditions to our native trillium: moist, well drained loamy soil and dappled sunlight. With this in mind I tucked the two small rhizomes into an area near the steps where they would not get lost among the other spring bloomers or over-run by the rampant lily of the valley. Of course, I promptly forgot where I put them. If I put in labels the rigors of winter took their toil upon them and they disappeared. 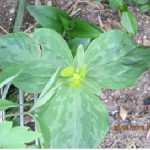 Last year I noted a couple of trillium with a strange mottled silver pattern on the leaves.  I didn’t spend too much time puzzling over them but planted a “volunteer” bleeding heart beside them. This year they were back and one had a bud.  After watching it for almost two weeks, it finally bloomed. It was a yellow trillium!

The flower of a yellow trillium, yellow wake-robin or wood lily, consists of three petals of pale yellow with greenish veins.  The petals often have a twist to them. The anthers are pale green and the pistils are yellow. Three slender greenish sepals are below the petals.  The flower is stalkless and sits on what appear to be leaves. They are actually silver mottled bracts. As the name trillium indicated there are three of these pseudo-leaves. In the case of yellow trillium these bracts have the full function of leaves. The flower has a slight lemony odor.

The plant grows from a rhizome and will form a clump in time. One single stalk arises from each section of the rhizome. Since the plant goes dormant by early summer it is not a good plant for a perennial border. It shines in a wildflower garden or clumped under trees. It also mixes well with ferns. Yellow trillium is best used with plants that are late out of the soil in the spring but will provide some welcome shade before they go dormant.

The plant does produce a seed capsule but the seeds are reportedly difficult to germinate. They require stratification. Trilliums are best propagated by division