Last year grafted vegetable plants began to appear in plant catalogues. The idea was the same as grafted roses or trees; combine a very hardy root stock with a plant that has desirable characteristics but isn’t particularly robust. Monica has found us something that is even more interesting than the grafted tomatoes and peppers that we were contemplating last year. This year we have the Tom-Tato. This rather weird plant is a cherry tomato plant grafted onto a potato root. 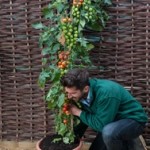 tomato and the potato are “kissing cousins”.  Tomatoes and potatoes, as well as eggplants and peppers, belong to the Solanaceae family. The more genetically similar the plants are, the more likely that a graft will take. It is a similar to the selection process in human organ transplants. Family members make better donors than complete strangers and animal organs are going to be rejected.

The process is the same as with all grafted plants.   Tomato and potato seedlings are ready for grating when they are a few weeks old. The tops are removed from the potato seedling and the roots are severed from the tomato. The cut ends are joined and the plants are kept hydrated until the grafts fuse.

Thomson-Morgan, the British seed company, that produced the Tom-Tato claims that it will produce over 500 cherry tomatoes in the growing season and then a nice crop of “big”, white potatoes will be available underground. The plant is described as easy to grow, can be grown indoors or out, in the ground or in a pot. The experienced gardener is going to suspect, at this point, that the quantity and quality of the crop is going to vary greatly with the growth method. Perhaps a bit of exaggeration as to the amount of fruit hmmm?

The skeptical/pessimistic gardener is going to doubt that he is going to get much of a crop at all. A plant is simply not geared to produce abundant quantities of both tubers and fruit. Tomato plants reproduce by seed. All of their energy goes into making fruit and seed. Potatoes, while they do produce seed, primarily reproduce via tubers. All of their energy goes into producing large roots in which they store the food that gets them started next year. We suspect this is going to be one confused plant. If you do decide to grow one fertilize it heavily and maybe play it some soothing music.

There doesn’t seem to be a distributer of the Tom-Tato in the US. It is available in the British version of the Thomson-Morgan catalogue  http://blog.thompson-morgan.com/gardening-news/tomtato-harvest-potatoes-and-tomatoes-from-the-same-plant/     Tharfield Nursery in New Zealand has come up with a Potato Tom that they say they will be supplying world-wide. We suggest making your own