Pat sent us a picture of her newly renovated bonsai umbrella tree (Schefflera). Pat has been working on this project for a number of years. The umbrella tree is a fairly fast growing plant, so it requires more pruning than some of the slower growing bushes or trees that are the customary subjects of the bonsai artist. Periodically Pat gives it a trim. Here are her latest results.

Keeping it small is relative. Those of you who have seen the bonsai collection at Phipps Conservatory are aware that bonsai comes in all sizes. They range from teacup size to plants that are three or four feet tall and are planted in formidable pots with a bushel of soil. What they all have in common is that they are aesthetically pleasing shapes that give the appearance of having been sculptured by nature. 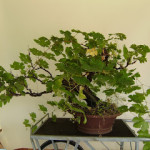 Like most Japanese art, bonsai is much formalized. There are a number of shapes into which bonsai can be trained and each has a specific set of characteristics and a name. Referring to  the pictures in “The Complete Practical Encyclopedia of Bonsai” it appears as though Pat is going for a semi-cascade or Han-Kengai whether she knows it or not. The goal in semi-cascade is to produce a plant that gives the appearance of having been forced into prostrated position by the trials and tribulations of nature. Perhaps it is growing in a crevice in rocky outcropping or has been bent down by constantly blowing wind.

The most important aspect of bonsai training is, of course, pruning. Root pruning keeps the plant small and growing vigorously. The branches are pruned to maintain the desired shape and to encourage budding. Wiring is also important for guiding the trunk and branches into the proper directions. The wires are bent a bit more each day until the correct configuration is achieved. Clamps may also be used to train branches.

Leaf removal keeps the leaves small and in proportion to the tree size. The larger leaves may be removed and the smaller ones retained or the plant can be completely defoliated. Repeated defoliation of a healthy plant every spring encourages the growth of smaller leaves.

Grafting is another technique that can be used and there is a whole series of procedures that can be used to make the tree look old. These are called deadwood techniques and as the name suggests they produce dead branches, scars or hollows in the trees to give the appearance of age.

Bonsai is a study for a life time and there is far more to it than we could ever discuss here. It is also not a hobby for the faint of heart. It requires considerable patience and a certain amount of ruthlessness.