Spring is not far off although the amount of snow on the ground gives lie to that statement. Ignore the snow and think about sowing some poppy seeds to add their ephemeral beauty to your garden.

The bloom period of poppies is short, lasting about two weeks in the late spring to early summer depending on the variety. Some, supposedly, will rebloom if the seed pods are removed but since they are mostly biennials, annuals or short lived perennials those seeds are important to maintain an on-going poppy planting. Poppies will self-sow if allowed to go to seed. While the short blooming period is a disadvantage, poppies have another curious habit that makes them ideal for someone with a small garden. Shortly after they bloom the plants disappear. They don’t die, unless they are annuals, but simply go dormant. This makes the area available for plants that bloom later in the season. 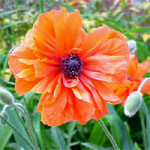 There are quite a few different kinds of poppies but three types are most commonly grown.  The oriental poppies (Papaver orientale)  are the red and orange poppies with the ferny foliage that are the staple of cottage gardens. There are many hybrids now so they are available in white, pinks, salmons and plum shades. 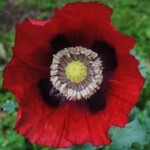 Papaver somiferum is the opium poppy and it is frequently seen in informal gardens. Laws governing its growth vary but are rarely enforced for a couple of plants.  Opium is derived from the seed pods and the seeds are the source of poppy seeds that find their way onto your bagel. Yes, eating poppy seeds can skew a drug test. It has happened so frequently that the level for a positive federal test has been raised. This hasn’t totally eliminated the problem as not all companies have adopted these higher standards.  Opiate levels can remain elevated up to 16 hours after the ingestion of poppy seeds. Opium poppies are annuals. The common color is red but hybrids have increased the range of colors. They are available in shades of mauve, white, pink and red. 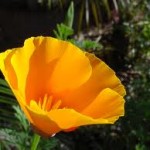 California poppy (Eschscholzia californica) is a native wildflower and considered something of a weed in the right circumstances. The plant is small, a foot or less, and the equally small flower is traditionally orange. Again hybrids are available in yellows, salmons, whites and pinks. This one is an annual or short lived perennial. The California poppy is the state flower of California and the Mojave Dessert houses the Antelope Valley California Poppy Reserve http://www.parks.ca.gov/?page_id=627 Check the pictures as they are quite impressive.

Poppies are cool weather plants that don’t like to have their roots disturbed, so they are generally grown from seed. The seed is sown in the very early spring because they need cool conditions to germinate and many of them require stratification for germination. Fall is also an acceptable time to sow poppy seeds.

The seeds also need light to germinate. They should be sown on top of the soil of a prepared bed or lightly scratched in. The traditional method of sowing poppy seeds is to sprinkle them on the top of a spring snow. The snow provides the stratification and as it melts carries the seeds down to the soil. The melting snow provides the moisture needed for germination.

Choose a well-drained soil for your poppies and they will continue to thrive even under dry conditions. After they are established they require little care. They will cheerfully go on reseeding themselves year after year and even if the perennial ones disappear there are always new small plants to take their place.

If you choose the hybrid poppies they will not come true from seed. It you plant the annual hybrids this means that you will have only one year of what you planted. The second year and subsequent years what you get is anybody’s guess. The same is true of the perennial hybrids but at least you will have the original plants for as long as the variety lasts. If you plant the open pollinated non-hybrids they will breed true and will enhance your spring garden with their beauty for years to come.