We’ve been hearing about the extensive damage that extreme winter conditions have caused to both evergreen and deciduous shrubs this year. Knockout roses have been hit particularly hard. These tough, basically carefree bushes are hardy to around -20 degrees F with individual differences. We had temperatures this winter that were that low and lower. There are always cold pockets and areas that are more exposed, so some plants may have suffered more damage than others.

Several of the plants on the corner bed at the Brady St. lot look totally dead. As of spring cleanup on May 10 there was no indication that there was any regrowth. I’m getting some regrowth from the root on a few of mine and the ones on the embankment have a few branches that appear to be viable. Pat says that hers look terrible, as well. The roses in Lisa’s yard, which is in the city and in a fairly protected environment, have not fared well either. She fears for the survival of a very hardy antique rose that she has had for years. The Carpet Roses on the Brady St. lot seemed to have survived and are currently producing new leaves. They are at ground level and haven’t been subjected to the desiccating wind that the more upright bushes face. Monica stopped by the city building this week and says that the Knock-out roses there appear to be dead. That includes the really big one on the right of the building.

Roses put out leaves last year at least twice and both times a freeze followed. Hopefully, they made up for this loss of vitality over the summer but with the extremely cold winter that followed, I suspect that we are going to lose some of the roses as well as other deciduous shrubs.

Hydrangeas and butterfly bushes have also suffered according to reports across the country. I don’t know how that affects us here as butterfly bushes routinely die back in the winter. Even if some of the top growth survives it is best to cut them back to the ground for a better shaped bush. The borderline hardy hydrangeas are not going to bloom this year but two hardier ones that I have are already putting out leaves on last year’s growth

Even if some of your shrubs look completely dead don’t get out the shovel just yet. Top hardy and root hardy are two different things. We are having a rather late spring this year and there is the chance that the roots of plants that look completely dead are still viable.  Prune off the dead wood and give them some time. Watch for shoots coming up from the roots. I was delighted to see that my ornamental elderberry, Sambucus nigra ‘Black Lace’ has put up shoots from the root. About half of the plant died last summer and the remaining branches were the victims of winter kill. I think that competition from another nearby elderberry, that is larger and hardier, is causing problems. I’ll see that it gets plenty of water and is properly fertilized this summer and hopefully it will come back to its previous glory. The Grandiflora rose ‘Queen Elizabeth’ is also putting out shoots from its root. So give those bushes a chance to regenerate before you consign them to the trash heap. Of course if your plants are grafted and you have lost all of the growth above the top graft you might as well dig them up. The roots may regrow a plant but it will not be the same as the one you had before.

Evergreens are another matter. These plants hold their leaves throughout the winter and continue to transpire. Severe winter conditions hit them harder than plants that go dormant. Holies have been hit particularly hard. Linda says she pruned the damage off of the ones at the library that were distressed this winter.  I’ve had reports of holies in the outlying, colder areas that have been reduced to a single green branch or two. Many evergreens are showing signs of winter kill on the side of the bush that faced the prevalent winds or was unprotected by a nearby structure. Those growing along the ground or against a building appear to have survived with the least damage.

Most of the evergreen damage was caused by desiccation. It is advisable to water evergreens in the fall until the ground is thoroughly frozen to prevent winterkill. Plant them in areas protected from wind and avoid planting in areas that are exposed to salt. Salt can cause further desiccation.  According to Illinois County 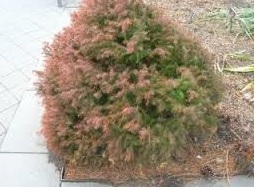 Extension, expect more winter kill on yews, boxwoods, hemlock and arborvitae.  Firs and spruces will most likely be damaged on the side that is exposed to winter winds.

This is a time to be patient with plants that appear to have been killed or severely damaged by winter conditions. Give them a chance to recover.  Make sure they have plenty of water and fertilize lightly. Prune off obviously dead wood but allow evergreens the chance to shed what looks like dead foliage naturally. It might just be the leaves that are dead and the branches are fine. By late spring or early summer you should be seeing some regrowth on plants that are going to make it. At this point you can prune more heavily as what is dead will be more obvious. Baby the most severely damaged through the summer and you may be surprised at how tough some of your plants actually are.