There are cultural differences in how we cook food and what we eat but when the food is of the same species generally the same parts of it are consumed. The cuisine of a country may or may not include the tomato but nobody eats the leaves and ignores the tomato if they are familiar with the plant. Ditto squash. We might enjoy a stuffed squash blossom or two but generally we confine our depredations to the early male blossoms and let the squash develop so we can be inundated with zucchinis by August. So when Pat and Sharon came back from Washington with the tale of having been served pea “stems and leaves” we all thought it a bit odd. We eat the peas. Maybe if they are sugar snap peas or their ilk we eat the pods. We do not remove the leaves and the stems for consumption so that the plant is too depleted to produce those delectable green spheres that are so hard to keep on a fork.

This required some further explanation so, of course, I went digging.  What is actually consumed are pea shoots. Depending on how you interpret “shoots”, it can be the first four inches or so of the pea plant as it emerges from the ground. This would include leaves, tendrils and stem. It is the equivalent of longish sprouts. Generally, snow peas are used but any pea may be sprouted for this purpose. Some growers let the plant get larger and harvest the growing point, plus the tendrils and a few larger leaves. One even mentions using a few blossoms. As those of you who have had birds or other critters remove the tops of your peas know this destroys the pea plant. It is not like removing a few beet greens for consumption and then going on to harvest the beets later in the season. This plant isn’t going to grow anymore

So why do this? Apparently, the shoots have a more delicate pea flavor than regular garden peas.  Peas take from 50-60 days to mature. With pea shoots you can have your pea flavor, if not peas, in 8-14 days. They can be grown in smaller areas and in pots. Pea shoots like most green are nutrient dense and light on calories. Two cups of pea shoots (one serving) contain 10 calories. For those 10 calories you get 35.5% of your required daily vitamin C, thiamin 5.75%, vitamin A 15%, riboflavin 7%, vitamin E 8.75% and vitamin k 132%. They can also contain phytochemicals and antioxidants that fight cancer and other diseases.

One cup of peas (one serving) contain over 116 calories and contain 26%  of the daily requirement of vitamin C, thiamin 30%, vitamin a 22%, riboflavin 12%, vitamin E negligible amounts, and vitamin K 39%. Calorie for calorie the pea shoots are more nutritionally dense than the peas although these numbers differ greatly from source to source. Different varieties of peas differ greatly in antioxidants and other nutritional elements.

As you might guess pea shoot consumption originated in Asian cuisines. The Chinese have been using them for centuries. In Mandarin they are dou maio. Typically they are stir fried. There are commercial sources for them in Britain where they are field grown. In the US the main production area seems to be the northwest, specifically Washington and Oregon. The suggested sources are specialty stores and farmer’s markets.

Pea shoots are generally used much the same as you would use any green. They can be added to cooked dishes where you would use spinach or other quick cooking green. The may also be used as a basis for salads or as an added ingredient. Often they are used with snow peas or green peas. Pea shoots make a pretty and unique garnish for appetizers or meats. There are even exotic alcoholic drinks that incorporate the shoots.

This recipe sounds excellent should you wish to try pea shoots.  I don’t think that I am going to sacrifice my peas for the experiment. It comes from Skye Gyngell Head Chef at Petersham Nurseries in Great Britain. 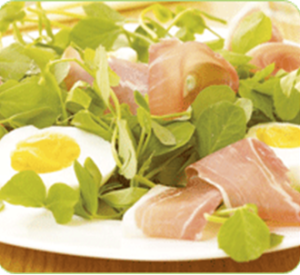 Remove from the pan and leave to cool. Once you can handle them, remove the shells and cut in half. Make the dressing by thoroughly mixing the lemon juice, Dijon mustard and olive oil. Season to taste. Arrange the pea shoots, slices of ham and halved eggs on a platter and drizzle with the dressing.