When we dig up plants for transplanting, we are usually careful to dig deep and wide so that we do not break any on the roots. We are now going to examine some situations where you might want to deliberately remove roots and the safest way to do that removal. The most common need for root pruning is in the repotting of house plants. With sometimes limited space, it is not always desirable to keep upsizing the pot when a plant has outgrown its container. A plant that is root bound cannot be left in a too small pot as eventually the plant will die.

When a plant that is root bound is removed from the pot the roots will frequently be found growing in circles around the inside of the pot. While these roots can be teased into a more acceptable growth pattern and the plant repotted in a larger pot, another option is to root prune it. Using a sharp knife remove a slice from each of the four sides of the root ball and a similar slice from the bottom. Always use clean tools when root pruning and sterilize them by dipping them in a bleach solution or running them through a flame. This will help keep bacteria and fungi from invading the cuts. After the roots are pruned the plant can be repotted in fresh soil.

At this point it is a good idea to evaluate the plant. If only a small amount of root tissue has been removed the plant may be fine.  However, if there is now a large amount of foliage compared to the root system some top pruning is in order. The roots provide water and nutrients and if there aren’t enough of them to support the foliage there will be wilting and possible leaf drop. A rule of thumb is to remove foliage to equal the amount of roots that have been removed.

A similar type of root pruning is advisable when planting out container raised perennials, trees or shrubs. Shaving the outside of the root ball will remove kinked roots allowing the new roots to spread in a more normal fashion. Try not to cut tap roots or larger roots. Tease the roots out from root ball as much as possible.  Removing the outer layer of roots will encourage new root growth that will spread into the surrounding ground. It is important to keep root pruned plants well watered and fertilized appropriately. Sterile tools are just as important when working with outdoor plants as they are when working with house plants.

Bare root plants are root pruned and top pruned when you buy them. Grapevines are a good example. The plant is top pruned leaving two or three buds on an approximately eight inch stem. Extraneous buds are removed as are any roots above the main root ball. The root ball is then trimmed back to six or eight inches of root. Dead roots and smaller roots are removed. Plants trimmed in this way may get off to a slower start but they produce more vigorous plants and better fruit or flowers after the second year. Roses, and many other bare root shrubs, are pruned in a similar fashion.

Shrubs and woody vines are sometimes root pruned for the purpose of rejuvenation. Old plants, plants that have become overgrown or plants that have stopped blooming are candidates for root pruning. This is not the first choice for bringing a plant back, as it is a shock tactic. It’s the equivalent of tossing that bedraggled house plant on the compost heap and finding that it is blooming the next time you look. This kind of root pruning is performed in March or October when the plants are dormant. The 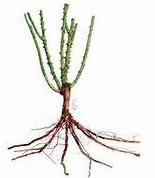 actual procedure is done by plunging a spade into the soil or digging a trench around the plant. The tricky part is to know how far from the plant to perform this procedure. According the Clemson University web site a 5 foot shrub should have its root system reduced to 18 inches across, so you would prune 9 inches out for the base of the plant. The shovel should go in 14 inches deep. For a 7 foot shrub the proscribed distance is 11 inches from the base and the depth is 15 inches.

This is also the procedure used when moving trees or bushes. Small trees with a diameter of one inch or less can be dug and moved bare root. They probably will not have a sufficiently complex root system to hold the dirt. The rest should be root pruned first. This is done using the same method as above. The Clemson University site http://www.clemson.edu/extension/hgic/plants/landscape/shrubs/hgic1055.html has a chart that tells you how much of a root ball should be prepared for a given size or type of tree. A rule of thumb is to not root prune within the drip line of the tree. Root pruning is done in the fall for trees that are to be moved in the spring and in the spring for trees that are to be moved in the fall. Root prune while the trees are dormant and dig and move them when they are go dormant in the opposite season.

The last reason to root prune is landscaping or problems created by the root. The classic example is the weeping willow growing into the drainage pipes. You also get situations where a building or patio is being built near an old tree or the tree roots are impeding mowing. There a certain precautions that must be taken when root pruning to alleviate these situations.  Cut as few roots as possible and as far away from the tree as is feasible. Many cuts and cuts close to the tree put a great deal of stress on the tree. If you eliminate too many of the smaller roots the tree will not regenerate its root system as larger roots are not as viable as the smaller ones. Older trees or trees in poor health do not tolerate root pruning well. Leaning trees should not be root pruned as they are likely to fall over. The shallower the soil the further from the trunk the tree should be root pruned. Since it hasn’t put down deep roots, eliminating too many of the surface ones will be detrimental to the tree’s support. Some trees are more tolerant of root pruning than others. It is a valuable tree check before you root prune.