Swamp milkweed (Asclepias incarnate) is our featured plant of the month. It was brought to mind by one that bloomed in our plant collection this summer and was mislabeled as phlox. Since no one wanted to grow it for future division I put it on the embankment in the bed across from Harley-Davidson where there are several seeps. It is firmly rooted now and looks as though it is going to take hold. We will have some to pot up in a couple of years and it will be properly labeled.

We often forget our native plants in our quest for the more exotic species. Sometimes this is because the native species, while beautiful, are so well adapted to local conditions that growing them presents a problem of keeping them from taking over our gardens. In a word they become weeds! So far this hasn’t been a problem with my swamp milkweed, which has stayed in the wet area where I planted it. This plant was acquired a couple or three years ago at a native plant sale and has formed a nice clump about 2 /12 feet across. I believe that I have the cultivar “Cinderella” which is a more compact and shorter version of its wild cousin. It 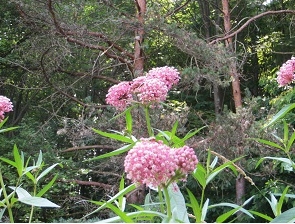 bloomed and set seed both this year and last. I have no doubt that it will eventually travel to the other wet areas in the yard and I really have no problem with that happening.  These areas  are never going to support a more formal arrangement, weeding them is difficult, mowing is impossible and sometimes it is just better to let nature take its course with a little guidance.

Like other members of the genus Asclepias, (milkweed butterfly weed, etc.), swamp milkweed is  attractive to butterflies. It is the host plant for the monarch caterpillar and is a nectar source for a host of other butterflies moths and insects. There is an entire subspecies of butterflies known as the Danainae or milkweed butterflies, of which the monarch is the best known, that live exclusively on the milkweed plants. Both the caterpillars that eat the leaves and the butterflies they become retain the bitter glycosides produced by the plant making them distasteful to natural predators. There are about 300 members of the Danainae worldwide but only four are native to North America: the monarch butterfly (Danaus plexippus); the queen (Danaus gilippus); the tropical milkweed butterfly (Lycorea cleobaea); and the soldier Butterfly; (Danaus eresimus).  Except for the tropical milkweed butterfly they all lay their eggs and the larvae feed exclusively on milkweed plants. The swamp milkweed plant produces hundreds of blossoms that provide an abundant nectar source for moths and insects, as well as butterflies. This plant is a must for a butterfly garden or a pollinator garden.

Swamp milkweed thrives in heavy wet soil. It has a fleshy white root that is well adapted to soils with low oxygen content. The plant though will grow in regular garden soil. It may need watering in extremely dry weather but generally the root system will hold sufficient water to keep it viable except in the driest conditions. It grows well in low-lying areas, in ditches or around ponds or other water sources. Swamp milkweed prefers full sun to partial shade and is hardy from zone 3-9.  Plants may be divided in the spring or sown from seed. Since the seed needs to be stratified the simplest means of starting it from seed is to sow the see outdoors in the fall.

The swamp milkweed plant is tall and can reach a height of 5 feet under ideal conditions. It is best used as a specimen plant. As it does grow from rhizomes it will produce a nice clump but will not grow out of control. It is a great plant for naturalizing in wet areas that are difficult to take care of.

The plant blooms mid to late summer. The individual flowers are five petaled with a raised center and are borne in umbels (short stalked flowers radiating from a central point). The raised center or corona in the swamp milkweed is pale pink. It is the pollen bearing structure. The fused pistils and filaments are white and the petals are a darker pink or rose color. There is also an all white cultivar “Ice Ballet”.  The umbels are borne at the ends of the branches. The flowers are followed by slender brown seed pods, which contain the typical milkweed seeds with fluffy parachutes for maximum dispersal. The leaves are opposite and slender.

The milkweed derives its name from the white sap that the plant exudes when it is injured. This sap is poisonous containing a cardiac glycoside that can interfere with working of the heart if ingested in large enough quantities.  The sap is also very bitter, which keeps most animals and insects from eating the plant with the exception of the specially adapted caterpillars. Despite the poisonous nature of the sap the root of the plant has been used extensively as a medicine. The name of the genus Asclepias comes from Asklepios, the Greek god of healing and medicine and its common name, pleurisy root, comes from its use as a remedy for diseases of the lungs. Although various parts of the plant have been used in the past as herbal remedies for a variety of maladies, the varying toxicity of the different species makes it advisable to check with an expert before endeavoring to use it medicinally.

Incredibly, with the plants reputation for being poisonous and foul tasting, native people have used it as a food source.  The unopened flower buds are cooked or dried and stored. The taste is said to resemble peas. The tips of young shoots are cooked and said to be similar to asparagus, while the older shoots are more akin to spinach. The young seed pods can be cooked like snap peas and the flowers can be cooked down into sweet syrup that was a source of sugar for native tribes. Apparently, heating the toxins render them harmless.  The University of New Mexico suggests that, “The sap contains poisonous cardiac glycosides. These toxins are destroyed by heat, so milkweeds should always be cooked before they are eaten.”