While the Penn State trials are slow to be put on line, information on one annual evaluated in the 2014 trials found its way into an article out of University Park. The point of the article was that all new plants aren’t necessarily the best of the species. Frequently, the older plants in the trials score better than the latest from the breeders. It does give us a current summary of Angelonia (Angelonia angustifolia).

The common name for Angelonia is summer snapdragon. The flowers, which range from mauve to deep purple in addition to white, pink and bicolor, do 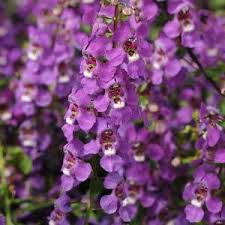 indeed resemble a small snapdragon. They grow in terminal spikes that are approximately 8 inches long. The plant is bushy and is fairly small at 12 to 18 inches. The leaves are 3 inches, longer than they are wide, and have toothed margins. The foliage is mildly fragrant.

While this plant is used as a bedding and basket plant in zone 5, it is a true perennial in zones 9-11. It is native to Mexico and the West Indies. Unlike many perennials, summer snapdragon has a long blooming period. The fact that it blooms prolifically from June to September allows it to fulfill the qualifications for an annual bedding plant. It is reportedly difficult to overwinter indoors so its perennial properties are rarely tested in zone 5. It roots easily and possible the cuttings are easier to over winter. Seed can be saved from the non-hybrid varieties and should be started about 10 weeks before the last frost.

Angelonia prefers a moist, fertile soil with good drainage but is somewhat drought tolerant. It survives summer heat and humidity well and should be grown in full sun. It is basically a trouble free, tough plant that is excellent for a bedding, pot and basket plant. It isn’t going to die off in August when the temperatures reach their highest and forgetting to water it occasionally isn’t going to kill it. The only drawback is the rather limited color range and the fact that it rarely shows up in our garden centers. The seed also seems to be extremely expensive, as are the plants. If I can find them in the local stores I’ll try starting some. There is just about time to start them for the coming season.

While there is probably very little hope of acquiring the Penn State trial varieties of summer snapdragon locally here are the 2015 results. Out of the 27 varieties tested 2 older varieties receives an overall score of 4.9 out of 5. These were Angelonia Alonia Big Violet from Danziger Flower Farm, and Sungelonia White from Suntory Flowers. Six plants were rated 4.8. Of these 2 were new varieties: Angelonia Archangel Dark Rose from Ball FloraPlant and Serenita Pink from Pan American/Kieft. In all, over the years, 206 Angelonias have been tested in the Penn State trials. Three received a 5.0 score (AngelMist Spreading Pink [2008], Serena White [2009], and AngelMist Lavender Stripe [2004]). Generally speaking Angelonias have grown well at the trials and seem to be well adapted to the local climate. Those of you who have visited the arboretum in State College have no doubt seen them in the annual borders.  If you can find them snap up these snapdragon look a likes.