At the Girl Scout program one of the young ladies shared the information that a banana was a berry and a strawberry was not. Then Nancy asked the fatal question, “What is a peanut”. That is an interesting question for a peanut is not a nut and it has one of the weirdest growth habits of the plant world.A peanut, characterized as a dry podded seed, is actually a legume like a pea or a bean. All legumes are part of one family Fabaceae or Leguminosae.

Legumes are all nitrogen fixers. Nitrogen fixers work with bacteria (rhizobium) that convert nitrogen gas from the air into a form that is usable by the plant. The bacteria live in nodules in the roots of the nitrogen fixers and the nitrogen is also stored in these nodules. It is often necessary to inoculate the soil when planting legumes as all soils to not contain strains of desirable bacteria. Since nitrogen fixers make their own nitrogen they do not need to be fertilized with nitrogen containing fertilizers. While they don’t release much nitrogen into the soil as they are growing, when they die they enrich the soil with the stored nitrogen.

Why isn’t a peanut a nut?  The obvious explanation is that nuts grow on trees and peanuts grow underground. That isn’t it. Potatoes grow underground, too. According to the taxonomists a nut is a shell covered fruit. That shell is hard and contains one seed or at most two. The shell does not open to release the seed for germination. The correct term for this is indehiscent. Peanuts like other legumes have more than one seed per pod and the pods split easily to release the seeds (dehiscent). Confusion arises because the shells of peanuts are harder than peas or beans and the seam along which they split is not as readily visible.

Another characteristic of nuts is that the seed is not attached to the ovary wall. If you crack an acorn or a hazelnut the nut meat is not attached to the shell in any way. In legumes the seeds are attached. This is readily visible especially in peas, which often have to be detached from the small green appendage that connects them to the pod. Again peanuts do not follow the rule since they are loose in the pot but they still aren’t nuts.  A lot of things we call nuts aren’t technically nuts and a lot of things that we don’t think of as nuts are. The difference is only of interest to taxonomists and possibly those with allergies.

There is something even more interesting about the peanut other than the fact it is not a nut. It produces its seed underground. When we 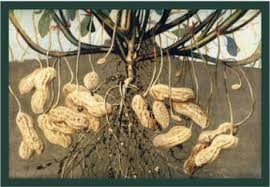 propagate plants from underground parts we are normally doing what is called vegetative reproduction. We are taking a tuber, a rhizome or perhaps a bulblet and from it growing another plant. The plant will be an exact genetic copy of the parent plant as it comes from a part of the parent. This is not true of a peanut. The peanut is an actual seed produced from a pollinated flower. It comes from a fertilized ovum and is not an exact genetic copy of the parent plant.  So how do the seed pods get underground?

About 40 days after germination the peanut plant produces small yellow flowers in the typical winged flowers of the legumes. Peanuts are self-pollinating and after pollination occurs the petals drop and the ovary begins to grow. This ovary takes the form of a slender protuberance called a “peg”. The embryo is in the very tip of the peg. The peg continues to grow until it comes in contract with the surface of the soil. Once the peg

This process of producing seeds underground is called geocarpy and is quite rare. It generally occurs in desert plants or plants of the tropical rain forest as an adaption that provides the best possible environment for the germination of seeds. It also occurs in some species of violets, some tropical begonias, subterranean clover (Trifolium subterraneum) and the American hog peanut (Amphicarpa bracteata).

The process by which a flower is produced above ground, is fertilized and then burrows into the soil is known as hysterocarpy. This is the process by which the peanut is formed. There is also a method where the flower forms underground, is fertilized there and produces seeds, all underground. This process is called protogeocarpy. This is even less common and the only example that I could find was a bizarre Australian genus, Alexgeorgea. There are only three species in this genus and speculation is that this means of reproduction developed because of the frequency of burn offs in its home range. It is a means of protecting the reproduction process from the flame and extreme heat. Aren’t plants wonderful and weird?

Although generally peanuts prefer a sandy soil they can be grown in our region. If you have clay soil, work in enough organic material to provide good drainage. Rodale suggests starting them indoors about a month before the last frost since they require 120 days to mature and the growing season in zone 5 is from May 30 to October 1.  Peanuts take about 10 days to germinate, so planting the seed outdoors might not provide you with much of a crop before the frost comes. It can be done however as I did it one year just for fun.

The seeds can be planted hulled or unhulled but, again according to Rodale, the brown skins should not be removed or the seeds will not germinate. Soil should be about 65° -70° F when the plants are set out. They will take some frost but probably not do much growing in cold soil. Plant them out 10 inches apart and keep them well watered.   Fertilization should not be necessary. After the plants flower watch carefully so you do not miss the process by which the peanuts get underground.