The rain has brought three self-sowing annuals back to my yard, plants that I haven’t seen in a number of years. The seeds have apparently been lying dormant just waiting for appropriate conditions to germinate. The one that has benefited most from the overly moist conditions in a little pink wildflower that has made itself at home in a number of places. The common name of this charming fairy flower is Deptford pink, mountain pink or just plain pink. It is Dianthus armeria. It is a member of the same family as sweet Williams, carnations and common pinks.

Deptford pink is an introduced wild flower. It is found in every state except Arizona, Alaska and North Dakota. It has also spread to much of Canada. It takes its name from the town of Deptford (now a borough of London) where it was supposedly very abundant. There is some controversy though, with it now being thought that the plant that old texts were calling Deptford pink was actually maiden pink (Dianthus deltoids) a more sprawling plant that is used as a ground cover. The name first appeared in Gerard’s Herbal  in 1633 and is applied to  “a Wilde creeping Pinke … which has many small tender leaues … which lie flat vpon the ground”.  This is obviously not the description of the upright plant that we now call Deptford pink. While Deptford pink flourishes in most of Europe, it has become increasingly scarce in England where it is on their equivalent of the endangered species list.

If one had to choose a word to describe Deptford pinks that word would be wispy. The plant ranges from 6 to 15 inches in height and has very fine, thin

leaves that are slightly hairy.  The flowers grow at the tip of the plant out of a cluster of leaves. The flowers are tubular but the bracts hide the bottoms of the flower so they appear to be flat. The bloom has 5 petals in bright pink with purple/blue stamens. The edges of the flower are “pinked’” as though cut 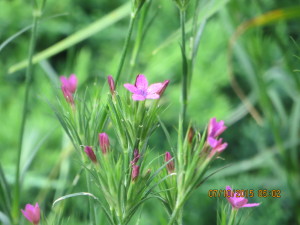 with pinking shears, which offers a secondary if unlikely source of the common name. The petals are dotted with white flecks. The flowers appear over an extraordinarily long period but, since each plant produces just one or two flowers at a time, they provide a sprinkling of color rather than a spectacular show.

Some sources describe Deptford pink as an annual and some suggest it is a biennial. It apparently can bloom from seed in its first year and may or may not return the following season. The seeds need to be stratified so they are best planted in the fall. They should be sown just below the surface and the soil must be pressed firmly down on the bed. An alternate method is to mix the seeds with damp sand and refrigerate for 30 days. The seeds may then be sown outdoors in the spring.

It is also possible to start Deptford pinks indoors. This method is the most likely to provide flowering in the first year. After stratification the seeds should be sown in flats 6-8 weeks before the last frost. Seeds germinate best at 60°F and germination will take place in 7 to 14 days.

Deptford pinks will grow in zones 3-8 and are perfectly happy in poor soil. They seem to grow best where the drainage is good and are prone to seed themselves into areas such as graveled driveways. They are quite drought tolerant after the have become established. Indeed they will grow where they choose to grow and are frequently found growing up among ground covers and other spots that are not cultivated or disturbed.

Dead heading the plants may keep them blooming longer but doing so might jeopardize their return in the following year. It is best to let them set seed. The seed may be allowed to fall naturally to the ground for next year’s crop or they can be collected. Collecting seed allows the grower to provide the preferred conditions for germination that Mother Nature may fail to supply.

Deptford pinks are best planted for their intense color. They are not substantial enough to make bold statement in a garden but they make a nice counterpoint in an area that is planted in a ground cover or a low growing plant that has an early bloom period. The can also be used in flower arrangements to lighten a grouping of more significant flowers. Welcome back, Deptford pink. I hope your will grace my garden again next summer.