One of our more unusual perennial wildflowers appeared in the woods just beyond my yard this month. I noticed it while trundling one of an infinite number of loads of weeds to the customary dumping area. Indian pipes, corpse plant or ghost plant, despite its ghostly white appearance, is not a fungus. It is a true plant that produces flowers and seed but lacks chlorophyll. It appears in the woods from June to September.

The name Indian pipes comes from the shape of the flower which turns downward and resembles a stemmed pipe. After pollination the flowers turn 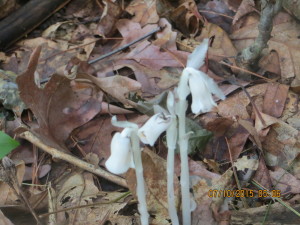 upright. Odd as it may seem, the flower produces nectar which attracts small, long tongued bees that cross pollinate the species.  The taxonomic name for Indian pipes is Monotropa uniflora. This name refers to the turning of the flower as it translates to mono…once, tropa….turned, uni….one or single, flora….flower.

The plants range in height from 6-10 inches and grow in small clumps or single stems. Since they lack chlorophyll they have no use for leaves and they have devolved into small scales along the stem. The coloration is white although some plants may have a pinkish tinge. The scales and flowers are dotted with black spots.  The plant turns black as it ages. A gelatinous substance is exuded if the plant is injured.

A plant that has no chlorophyll has to depend on an outside source for food. Lacking chlorophyll it cannot photosynthesize or utilize light to produce its food.  These plants, like mistletoe or Spanish moss, are dubbed parasites as they cannibalize the energy produced by their host plant. Indian pipes though are a double parasite. We have discussed before the relationship that some trees have with subterranean fungus. This mycorrhizal relationship benefits both the tree and the fungus. The mycelium of the fungus covers a much larger area than the roots of the tree can possibly cover. The fungus absorbs and stores water and minerals that are then “traded” to the tree for the nutrients that are the product of photosynthesis. Thus the fungus gets the sugars it needs but can’t produce because, lacking chlorophyll, it cannot photosynthesis and the tree gets water and raw materials that it would not otherwise have access to. This relationship is symbiosis or mutualism.

Indian pipes parasitize the fungus. The plant has a bird nest like clump of roots that insinuate among the mycelium of certain types of fungi. Somehow it fools the fungus into believing that it is forging a mycorrhizal relationship that is similar to the one it has with the tree. The Indian pipes then have access to food from both the fungus and the tree making it a double parasite.

While not a lot is known about what types of fungi that form this relationship with Indian pipe, they have been found in association with Russula and Lactarius mushrooms. The trees that are part of this relationship are found in rich woodlands that have an abundance of humus. These woods are usually dominated by maples and oaks. Indian pipes are also found around American beeches and conifers.

Obviously, with the very specific growing conditions required by these plants they cannot be transplanted. They grow where the proper conditions exist. Since they do not photosynthesize they do not require sunlight and thrive in deep shade. Indian pipe can be found throughout the U.S in all states, including Alaska but excluding the southwest, mountainous regions of the west and the intermountain areas of the west.

There are a surprising number of these parasitic plants that actually perform all the activities of a normal plant with the exception of photosynthesis. Look for Indian pipes the next time you are out in the woods and also check for another native parasitic plant, beech drops (Epifagus Americana) that can be found from late summer to early fall.