There was a bonus among the magenta rose campion( Lychnis coronaria) this year. A plant that bloomed white/pink appeared. This is rather rare variety of campion known as Lychnis coronaria ‘Alba’. The pink centered variety is known as ‘Angels Blush’. (See end of article for picture of  ‘Angels Blush’) Curiously, there is reference to a bicolored form mentioned in a catalog printed by a Philadelphia nursery from which Thomas Jefferson obtained the seed for the Lychnis he planted at Monticello. It is not a new form. Since this is a naturally occurring plant that wasn’t purchased I’m not sure what exactly to call it but it does have the pink markings of ‘Angel’s Blush’ but they fade as the flower ages.

The genetics are obscure but most probably it is a recessive form. Bluebell Cottage Gardens Nursery in Cheshire England that retails the seed and plant of the white form makes the disclaimer that states, “we grow these from seed collected from white plants, but there is always the chance that one or two might pop up pink.”  Apparently it does not take much in the way of cross pollination to cause the offspring of the white form to revert to the vibrant magenta that is more common. Presumably the white forms harbor a few genes for the darker form despite their color.

To understand how unusual it is to get the white or white/pink form one must perhaps grow rose campion and be aware of how prolific it truly is. The plant is a short lived perennial or biennial. The parent plants do not last long but they reseed prolifically. They are especially good for naturalizing as they don’t require pampering. They grow in almost any kind of soil as long as it drains well. In my yard they grow in a rocky, hard packed area that was once used to park a car. It is a dry area where even blue lyme grass is kept to a reasonable rate of growth. Queen Anne’s lace has just taken up residence and black-eyed Susans lead a stunted existence. The campion however thrive and continue to reproduce. There are now hundreds of them in this area and this is only the second time that the ‘Alba’ has appeared in at least 10 years.

The original white flowered plant appeared about 3 years ago. My initial impulse was to dig it up and isolate it from its colored brethren. In the end I left it where it was out of fear of killing it with the move. The hope was that it would come back or reseed itself resulting in a mixed stand. It did neither and I never saw another white one until this summer. This year the odd one grew in a totally different area but again in rocky well drained soil. It has also taken up residence in a shady location that gets little sun. This is contrary to what is advised for the plant, which is supposed to tolerate but not thrive in a semi-shady location.

The goal is to isolate the white campion from its more commonplace brethren and establish a patch of them that will breed true. Isolating them completely is impossible but if they self-pollinate there is a good chance that the seeds from the current plant will produce the ‘Angel’s Blush’ form.  There is some indication that it does come true from seed. “The pink-eyed white-flowered form of the woolly, grey-leaved Lychnis coronaria comes quite true from seed but the pink eye varies quite bizarrely with the season and weather conditions.” This comes from a nursery called Plant World Seeds that breeds them and that has four different colors of Lychnis coronaria. They have in addition to the magenta variety the alba or white form, ‘Angel’s Blush’ with the pink eye and ‘Hutchinson’s Cream’ which has a white flower but creamy splashes on the leaves.  The following is a website also might be helpful for those of you who save seed. It is a reader contributor database of plants that come true from seed.

There is some indication that rose campion seeds need to be stratified before planting. This is a hit or miss process in the home as keeping seeds in the refrigerator may or may not give them the chill factor they need. The easiest way to do it is to plant the seeds outdoors in the fall. I will be making sure that some of the seeds are sown at the base of the plant. If there is sufficient seed I’ll put some in a pot and sink the pot into the soil. Since the seeds need light to germinate I’ll cover the pot with glass or plastic that lets in the light. Hopefully, in the spring there will be more of this unusual form of rose campion. 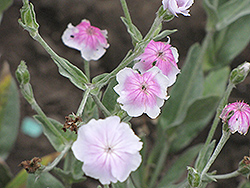