The question of non-blooming rose bushes was brought up at the June meeting. Why would a rose bush that previously bloomed stop blooming? One of the simplest explanations is a change in pruning methods. Some of the older roses that bloom only once a season bloom on wood formed the previous year. If you prune prior to the blooming period the stems

that would flower are being removed. These roses should be pruned right after flowering although undesirable stems can be removed at any time. The plant may be shaped after blooming by removing up to two feet of stem or to rejuvenate the bush it may be cut back severely but this must be done right after the plant blooms. Sometimes severely cutting back a bush will jump start blooming.  A very cold winter that kills off old wood will also prevent                  blooming in roses that bloom just once.    Ever     blooming roses should be pruned when dormant in January or February. They are fast growing and generally bloom on new wood so pruning doesn’t affect their blooming.

A second consideration is fertilization. Using a high nitrogen fertilizer will encourage vegetative growth to the detriment of flowering. Use a fertilizer that is high in phosphorus such as 5-20-10 or 10-30-20 to encourage blossoms.  It helps to have a soil test before adding fertilizer as too much phosphorus is not a good thing either. (A soil test is always a good idea if plants are not behaving as they should.) What is also important is the pH of the soil. Roses prefer a slightly acid soil of 6.0-6.5. This is within the range that phosphorus is the most available to a plant. A soil outside the 6.0-7.0 pH range will impede the uptake of phosphorus and other nutrients, as well. There are differing opinions on the question of adding phosphorus to the soil in the case of roses but this seems to be the prevailing one at the moment.

Adding Epsom salts to the soil or as a foliar spray may encourage flowering. Epsom salts is hydrated magnesium sulfate. While sulfur is rarely deficient in our soil a magnesium deficiency is possible and symptoms will be minimal unless it is severe. The Epsom salts may be added to the soil scratching it in or placing it in a trench around the plant. A foliar spray may prove to be more effective. It should be used at a rate of 1 tablespoon per gallon of water. This is also useful on tomatoes and peppers.

Roses need a lot of sun to bloom properly. They will not bloom without a minimum of 5-6 hours of sun per day and the more sun they get the better they will bloom. Over the years a rose bush that has been getting sufficient sun and producing blooms may be gradually shaded out by growing trees or new structures. The environment of our yards change with time and small trees become larger casting more shade as they grow. A tree in a neighbor’s yard may have reached a height to shadow a planting. It may have happened so gradually that it is not noticed especially if the area is not under surveillance all day. It would be prudent to check how much sun a rose bush is actually receiving during the day before reaching for more complicated reasons for lack of blooms.

Roses produce something called blind shoots. These are shoots that do not produce flowers. The branch will fail to produce a healthy bunch of leaves at the tip and no bud will follow. This picture comes from a landscaping service called Blue Rose Gardening of La Mesa and has the best explanation I could find.  https://bluerosegardening.com/2013/07/07/keep-your-roses-blooming-prolifically-pruning-blind-buds-or-blind-shoots/  There is little research on them and no 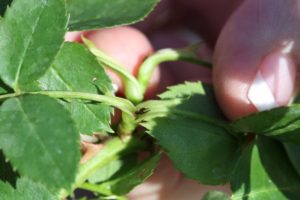 one is quite sure why they occur. Blind shoots have been blamed on a number of things including poor weather conditions and lack of sun. What they do is divert energy from the production of flowers into vegetative growth. Cutting them back by half may encourage them to flower by forcing the production of side shoots. It is one of those mysterious things that plants do and how to handle them is just a suggestion. Some growers simply prune them out.

Various other reasons for non-flowering can be gathered under the generic umbrella of environmental stress. Roses do not bloom well when it gets too hot. While it is unlikely that changing the environment in the vicinity of a rose bush in our area is likely to affect blooming it is certainly possible in very hot areas where the addition of a concrete sidewalk or the removal of a tree will increase the temperature enough to make difficulties for a rose bush.

Rose bushes need a lot of water to maximize bloom. If they are kept under-watered they will struggle to survive and will not have the energy to produce flowers. Several successive dry summers may result in no flowers on rose bushes that previously bloomed. Check to make sure that something that was added to the environment is not minimizing the amount of rain that the bushes are receiving.  Use a mulch and, lastly, consider increasing the water supply by deep watering the plants.

Check for insects and disease. Spider mites, borers, aphids and other pests can weaken a plant so that it will not bloom. Fungal diseases are common in roses and can prevent blooming. Keep the area around the roses clean and use appropriate fungicides if needed.

While many rose bushes seem to renew themselves and will flower for many, many years some do not. Plants are like people and they have a set life span. As they near the end of that life span they may simply stop blooming and no amount of encouragement will result in the blooms produced in its youth.