The Perennial Plant Association takes it upon itself to choose a plant each year that they designate as the Perennial {Plant of the Year. These are not finicky hybrids. Those that are hybrids like   Helleborus × hybridus (hellebores) are often natural hybrids and nature has bred out the weaker traits.    Generally, it is possible to grow those chosen throughout most of the United States. They are tolerant of variable climates except the most extreme ranges although two of the grass chosen over the years, Panicum virgatum ‘Northwind’ a switch grass and a nonnative Japanese grass Hakonechloa macra ‘Aureola,, were only hardy to zone 5. Usually the winners are hardy into Canada.  Frequently they are native plant that are well adapted to local conditions so they are low maintenance. Both Echinacea purpurea ‘Magnus’ (purple cone flower) and Rudbeckia fulgida “Goldsturm’ (black-eyed-Susan) have appeared on the list.  Sometimes they are cultivars of native plants that have escaped from gardens like Phlox ‘David’ and established themselves alongside the natives.  This not only means that they are not going to need to be watered, mulched and fertilized on a schedule but they do not have to be staked, pruned or divided frequently. Some of them though, like Neptea ‘Walker’s Low’ (catmint), will grow with just a bit too much enthusiasm. It is hard though to hate plants that are both beautiful and enthusiastic.

The plants chosen for the honor of Perennial of the Year are pest and disease resistant.  Some of the plants on the list of selectees are susceptible to fungal, bacterial or viral diseases. Even the grasses can be attack by the fungus that causes rust. Every pest from aphids to Japanese beetles are listed as feeding on some of them.  Under certain conditions especially in a monoculture situation there may be a problem but under normal circumstances the plants are sufficiently hardy to shrug off most attacks. I’ve grown many of the plants on the list and, although I’ve had trouble with powdery mildew among the phlox, the white flowered ‘David’ has never shown any of the rampant mildew that  resulted in the digging up of some promising looking phlox plants.  The deer prune it off every year but ‘David’ never fails to bloom. Some of them like baptisia have substances in the plant that are poisonous to insects.

All selections are supposedly readily available. While this is not always true in our local markets, native plants are becoming more popular and easier to find. Many of the plants on the list are already in our plant collection or we know someone who is growing them. I’m adding a list of all of the Perennial Plant of the Year winners should anyone wish to add them to their gardens.

The last two criterial are that the plants are supposed to have are multiple season interest and are easily propagated by seed, division or stem cutting.  The multiple seasons of interest may be why the grasses are on the list. They are one of the few honorees that are interesting in the winter..  Most of the plants just fade away as the weather grows cold and although the hellebores stay green they aren’t very decorative.  The huecheras (coral bells) have pretty colored foliage all year and the Amsonia turns a bright yellow in the fall. Some of the others have attractive foliage but most are only interesting only when they bloom.  Division is the best form of propagating most of the chosen plants and they grow fast enough to make it feasible. Of those that can’t be divided or don’t divide well the baptisia seeds itself as do the hellebores and the scabiosa.

This is all leading up the perennial plant of the year for 2017. This year it is butterfly weed 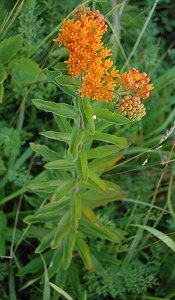 (Asclepias tuberosa.) I found this somewhat puzzling as I’ve always thought of butterfly weed as a rather finicky plant. We find, however that it is native to all states except Washington, Oregon, Nevada, Montana, North Dakota, Idaho and Wyoming. And of course, excluding Alaska and Hawaii. It grows in sandy soil, loam or clay soil. It will grow on hillsides, meadows and open clearings in wooded land. Apparently, it will grow with very little water. Since it grows everywhere from Florida to Maine and throughout the South and the Mid-west it obviously can survive in a multitude of climactic conditions. The one condition that it does seem to need is full sun.

Perhaps we need to define “grows” at this point. Yes, it grows in my heavy clay soil with less than sharp drainage but it does not thrive. It puts out a few blossoms every year but isn’t really spectacular. It has been my experience that when we find it wild in our area it is growing somewhere that the top soil has been disturbed, the soil is poor and the plants are relatively small. These are tough plants and they survive year after year in less than ideal conditions but don’t seem to reach their full potential in all the areas where they grow as a native plant. Having been shown a picture of one that was growing in North Carolina, that had to be three feet across, I’m less inclined to see this as something that is easily grown just about anywhere. Butterfly weed is also a plant that takes at least three years to establish itself. Given its penchant for growing here but not there even in the confines of a single yard the gardener does not know if he has picked a poor location or the plant is just biding its time.

The plant really doesn’t require much care.  It grows in poor soil so it needn’t be fertilized very frequently. The major problem with maintenance is not planting over it or too close to it in the spring as it is probably the last plant to come out of the ground. It is best to mark its position in the fall since it will not show itself until June.

Butterfly weed is relatively pest free but can be infested by aphids. While the aphids may not actually kill the plants, unless there is a very heavy infestation, they decrease the viability of the seeds. Getting rid of aphids on any kind of milkweed is a problem because it is a host plant for monarch butterflies and a nectar plant for many more. If you are growing it to attract butterflies chemical means are prohibited. The greatest devourer of aphids, the ladybug, also eats the larvae and the eggs of the monarchs. This leaves the gardener with mechanical means of removing them or attempting to repel aphids by planting marigolds or some other plant that they find offensive.

Butterfly weed is also not an easy plant to propagate. Since it has a taproot dividing is not generally recommended although apparently it is possible. (See Nancy for the trick to relocating it.) The seeds require stratification before they will germinate. The seeds, planted in wet sand, must be chilled 24⁰F-39⁰F for 4-6 weeks and then moved to 41⁰-53⁰ F for germination.  The ideal freezer temperature is 0⁰F and the average refrigerator temperature is around 40⁰F. Unless you have a refrigerator that you can lower the temperature on and a cool room to germinate the seeds the butterfly weed is probably best winter sown outdoors. Since most instructions specify just covering the seed they probably need light to germinate. (Monica frequently provides us with small plants so she has found a method that works.) Allegedly, the fresh seed can be started in water without stratification. It takes 3-4 weeks for the seeds to germinate. Tuberosa is the one species of native milkweed that is supposed to produce roots from stem cuttings in either water or a planting medium.

Asclepias tuberosa is a beautiful plant. It is attractive to butterflies and insects although the monarch probably prefers A. syriaca, the common milkweed. Does it grow well in our area? In my opinion that is a no. This is a niche plant. If it finds a place where it is happy it grows, blooms and reseeds. It just isn’t happy in all the places that it allegedly grows.