Quite a few wineries have sprung up in our area fairly recently. There are 10 listed in a 25 mile radius of DuBois. The first few could have been and probably were considered to be someone’s hobby, tax write off or retirement dream but 10? While they probably don’t grow all the grapes they use, as few wineries, do many of them list themselves as vineyards as well, which brings us to the question of grape growing and grapes in general. What grows where and why?

What are the wineries growing? Most local gardeners grow Concord grapes. A few who want a white grape might be growing Niagara? Why those two in particular? Are they wine grapes? Is this really grape growing territory? So let’s look at some facts about grapes.

The grape native to our region is Vitis labrusca or fox grape. It inhabits the entire eastern region of the US.  These are the grapes that grow wild in our woods. There are a few other native grapes that might possibly be growing in Pennsylvania but this is the most common one.  While they are hardy and a boon to wildlife these grapes are not particularly useful for human consumption. The wild grapes have large seeds and little pulp. There are however hardy cultivars of this grape that are available to wine makers and home grow

ers in our area

. These include Catawba, Concord, Delaware, Isabella and Niagara among others. All are cultivars of Vitis labrusca and grow in zone 5. These grapes, like all American grapes have the “foxy” aroma characteristic of our natives. (Another characteristic of native grapes is that the skins slip from the pulp easily.) The foxy designation has nothing to do with the animal but is the term used across the board for the musky, earthy overtones attributed to the compound methyl anthranilate found in American grapes. It is this aromatic compound that once made American grapes rather unpopular with winemakers. This foxy taste/aroma is what frequently causes American wines to be considered inferior to wines made with European grapes.

There are 5 other species of native North American grapes besides Vitis labrusca. Some of them are capable of being grown in zone 5 and others are not. Some produce desirable grapes while some are useful only for other characteristics.   Vitis rotundifolia is the

muscadine grape and is only hardy to zone 6. Generally it is grown in the South. The muscadine grape is incapable of cross breeding with other types of grapes as it has a different chromosome count. Therefore it is not part of the genetic pool available to the hybridizer who wishes to cross breed species.  Hybridizers have worked with intraspecies breeding to improve the grape.   Varieties of muscadine grapes are heavily cultivated in the south east and is allegedly the first grape put under cultivation in the US. They are used to make raisins and as table grapes. There is at least one intraspecies hybrid that is grown in New York State (a cross between Muscat Hamburg x Ontario) that is used to make a sweet dessert wine. Other cultivars are grown in warmer climates.

Vitis mustangensis or the mustang grape is native to the southwest. Its hardiness is from zone 6-10. The plant and the berries can be irritating to the skin when handled. Texas is the 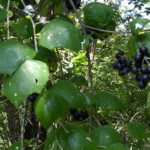 center of the mustang grape culture. The grapes are bitter, highly acidic and have little commercial value however prior to the Civil War a concoction known as Mustang Wine was popular as a drink and tonic.  If we are go believe the Carl Perkins song “Now, Mustang grapes, they ain’t too sweet But Mustang wine just can’t be beat.” It is apparently an acquired taste and the commercial wine makers are not interested in in using the grape. There is little information on attempt to use it in hybrids.

Vitis rupestris is sometimes known as the sand grape. It is indigenous to the plains of the

southwest Major populations are found in Arkansas and Missouri. Scattered populations range as far north as PA and into Texas. It has deep wiry roots and is frequently used as a rootstock both in the US and in Europe. Its root system makes it highly drought tolerant.  It is resistant to

Phylloxera and other grape diseases and is used in breeding programs to produce hybrid grapes that can withstand diseases without being grafted. It has been used in many French/American grape hybrids.  Baco Noir, a hybrid of Folle Blanche (a French white Vitis vinifera grape) and a red Vitis riparia is actually grown as far north as Canada.

Vitis riparia also known as the frost grape probably because it is hardy to -70 degrees F is native to most of the US and a good part of Canada. It grows everywhere except the extreme south and the south west. The roots are resistant to Phylloxera, the disease that destroyed 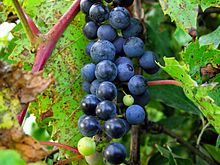 most of the European vineyards in the 19th century. Because of its resistance to disease and cold hardiness it is widely used as a root stock and in breeding programs. The fruit however is less than desirable. It has a high acid content, strong herbaceous aroma, and is highly pigmented. The small size of the berry makes it highly attractive to birds. It is sometimes used as a flavoring in wines but is not generally used on its own. Commercial grapes that have V. riparia genes   include Baco Noir, Marechal Foch, Triomphe d’Alsace and Frontenac.

Vitis aestivalis or the summer grape is native to the entire eastern part of the US, the Midwest and as far west as Texas. There are four varieties of Vitis aestivalis each with its 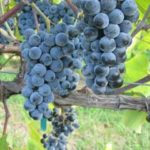 own specific range. An interspecific hybrid of V. aestivalis crossed with an unknown grape possibly of European origin has produced the cultivar, Norton. This hybrid has the flavor profile of European wine grapes plus excellent disease resistance. It however is difficult to propagate from dormant cuttings the usual method of propagating commercial grape vines. They must be layered, a much more difficult process since it must be done on the growing plant. This limits its use in the commercial market. It is grown in vineyards in the Midwest and is particularly prized in Missouri where it had been designated as the state grape.

European grapes, the classic wine grapes, are Vitis vinifera. These were found to be too delicate for out Pennsylvania climate and most of the colder regions in the US.    Dr. Konstantin Frank took on the task of grafting these French wine grapes to native American root stock and managed to install some cold tolerance into them. He did his work in the Finger Lakes region of New York, which of course, benefits from the lake effect. There are also elevation changes in the area which result in microclimates making it possible to grow plants not generally hardy in a specific region. Since his work in the 1950’s hybridizers have been at work crossing the more delicate European grape with the sturdier American varieties giving us hybrids such as the Chambourcin grape. The Winery at Wilcox produces a port that they have dubbed Port of Chambourcin. They also use this grape in their Elk County Red combining it with Chancellor, another French /American hybrid.

There are indeed grapes of all varieties that will grow in the colder regions. Most of them are hybrids of our native American grapes or are grown on native rootstocks. We will sum up with some statistics from PSU’s County Extension http://extension.psu.edu/business/ag-alternatives/horticulture/fruits/wine-grape-production    Pennsylvania has 250 commercial vineyards. Ninety two percent of these vineyards are of more than 20 acres. Seventy seven percent of grapes grown here are Concord and are used in grape juice. Table grapes make up 2% of total production. There are 1,800 acres of land in wine grape production with most of this being in native American grapes. The primary variety planted is still Concord with lesser plantings of Catawba, Niagara and various other natives. The French/American hybrids make up 3% of wine grape production. The most commonly grown hybrids are Chambourcin, Vidal Blanc, Seyval Blanc, and Vignoles. Some of the newer vineyards are experimenting with Vitis vinifera or European grape on a small scale.

Curiously, the multiplication of small wineries throughout Pennsylvania has nothing to do with suitable growing conditions but is the result of the Limited Winery Act, which was passed in 1968 to promote tourism. Wineries that produce less than 200,000 gallons of wine per year are permitted to sell directly to the public from the winery and at other locations approved by the state Liquor Control Board.  Among other perquisites are permitted to participate in various off site expositions, tastings and food fairs.