A new plant has come to my attention and I have 50 seeds. Perhaps it isn’t so new as it is a native wildflower found from South Central Washington to Baja California. As an ornamental however it seems to be more popular in Europe than it is in the US. The seeds 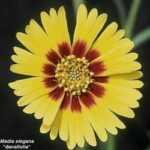 are found in British catalogues and they appear in an online catalogue from the Netherlands but are not available in our large seed companies such as Parks or Burpee. There may be a reason for this but it is not readily visible. The lack of popularity in this country may simply be the case of the prophet being without honor in his own home town. The plant is also known as tarweed for the sticky hairs that cover the stem and bottoms of the leaves.

Madia elegans or common madia is a member of the sunflower family and has numerous slender rays extending from a central disk. Flower color may differ in several subspecies and even within a subspecies. Typically the flower rays are a bright yellow. The rays close during the brightest part of the day and reopen in the late afternoon and stay open all night into mid-morning.  The yellow color may extend to the central disk or the disk may be white through dark maroon. Several flowers are born at the tip of a slender stalk. The plants bloom from June to October and are listed as a hardy annual. The plant is cold hardy to 23 degrees F.

The plant grows from 24 to 32 inches and has a spread of 8-12 inches.  Suggested use is as a border plant. It might best be planted near an entrance as the most significant feature of the plant is its aroma. Both the flower and the ferny foliage are said to have the odor of a “tropical fruit basket.” The variety that I have is indeed called Madia “Tropical Fruits”.

Although the British catalogs list its preference for moist soil with good drainage, its native habitat suggests that it might be fairly drought resistant. It grows along road sides, in open meadows and woodland borders. Madia will grow in full sun or partial shade. It is suitable for heavy clay soils, disturbed soils, loam or sandy soil. It isn’t fussy as to pH and will grow in alkaline or acid regions.

The plant seeds prolifically however it is not generally listed as being invasive. Birds and small mammals feed on the seeds and although the seeds are small it was a staple food of some of the tribes indigenous to California. The seeds were winnowed, ground and sifted to make a flour. They were also made into a Pinole a mixed grain cereal that is the darling of the Paleo food advocates.

It is suggested that the seeds be planted in the fall outdoors or stratified if planted indoors. The simplest way to stratify seed is to plant it in a pot, flat or other container, pop it into a plastic bag and put it outside in a protected location. Semitransparent containers such as milk jugs or quart soda bottles can be cup in halve and re-taped after the seeds are planted. Madia seeds need light to germinate so the containers should be placed in an area where they get some illumination. If you are using an unheated shed to stratify make sure they are placed near a window. It is not certain that stratification is necessary for this seed as information is scarce. The packet lists germination rate at 50% with just general sowing instructions. Possibly the germination rate is so low because while they do germinate without stratification the have a higher rate if they are exposed to cold. Hopefully, we will have a few examples of this interesting plant this summer.