Is your garden well weeded, thoroughly mulched and nary a plant that does not have a tag with its proper name inscribed upon it? You don’t know what you are missing!  I looked out the window last week and saw that a 6 foot azalea bush had suddenly sprouted numerous panicles of white flowers       . Upon closer examination the white flowers appeared to be the product of a vine that had grown up through the azalea. An autumn clematis had made its appearance

About 10 years ago there was indeed a clematis in or near that location. It grew from behind some landscape bushes, up the support pillars on the porch and twined itself along the railing for a dozen feet. It was spectacular in the late summer and early fall for several years and then poof it was gone. Since we are at the northern edge of the hardiness range of autumn clematis perhaps it succumbed to colder than normal temperatures. Willing to try again, I acquired a seedling. The next spring I couldn’t find it. Que sera, sera; this obviously wasn’t a plant that wanted to grow in my yard. And then several years later the azalea was covered with beautiful white flowers.

Clematis terniflora is an import from Japan and grows in various other parts of Asia.  It is sometimes called Clematis paniculata although, according to the Missouri botanical garden website, this is a species native to New Zealand. Curiously, despite its capricious nature in Pennsylvania and my lack of success with it this clematis is a garden escapee and has gone wild in parts of the US, especially the East and North West.  It is considered an invasive species in Florida, Georgia, South Carolina, Tennessee and Illinois.

Its ability to turn up in parts of the garden where it was never planted is due to the plant’s prolific seeding. The seeds can apparently stay viable long after the plant is gone. Perhaps this accounts for my new vine or maybe it has been there all along hidden among the leaves of the azalea and the other plants that surround it.

Sweet autumn clematis is, or course, a vine. It grows very rapidly and can be used quite successfully to cover fences, trellises, 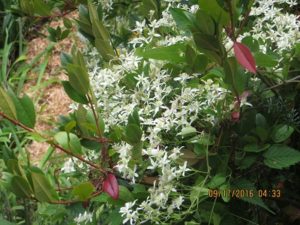 arbors and posts. It rapidly reaches a height of 20-30 feet and climbs via the twining leaf petioles.  It can be grown along the ground as a ground cover and will rapidly cover tree stumps and other unsightly objects.  When grown this way it will grow 6 to 10 inches above the ground and the spread of a single plant will be about 10 ft. It quickly shades out weeds. It can also be allowed to grow up other plants or trees but this sort of growth has to be monitored carefully so that it doesn’t overwhelm its host. It is an interesting way to give a plant a second, if false, blooming period. The appropriate way of keeping the plant under control is to prune it almost to the ground in the spring. As the vine produces blossoms on new wood, this insures an abundance of flowers as well as keeps the vigorous nature of the plant under control.

One of the main advantages of autumn clematis is that it blooms when there is very little else flowering. The bloom period, in our part of Pennsylvania, is late August through September. The blossoms grow in panicles or a loose cluster of white, four petaled flowers. The flowers have a delicate airy appearance and are fragrant.  They are followed by fluffy decorative seed pods.

Like most clematis, terniflora  prefers cool roots.  The mantra for clematis is “heads in the sun and feet in the shade.” Autumn clematis will thrive in much shadier conditions than its brethren. Mulch is helpful in keeping the roots cool. The plants don’t like wet roots and grow best in a well-drained soil. Frequent feeding is advised to maximize growth and flowering.

All parts of this clematis are mildly poisonous. While it might not be deer proof it is “deer resistant.” Generally, it is free of pests or diseases but may be susceptible to a fungus. Browning foliage should be cut out with clippers that have been dipped in a 10% bleach solution. Re-sterilize between each cut to prevent spreading the fungus. The sweet nectar is attractive to bees, humming birds and butterflies. Birds enjoy the seeds and are responsible for spreading them far and wide.

While I sometimes despair at my haphazard method of gardening and envy those who know just what is growing where, there are moments when I think it is the perfect way to grow plants. One of those moments was when the azalea burst into bloom with flowers from a plant that it has been slyly sheltering among its foliage for who knows how long.