For those of you who are native plant enthusiasts there is a native version of Clematis terniflora. It is Clematis virginiana or virgin’s bower, also known as old man’s beard. This whimsical common name comes from the fluffy white seed pods that form in in the fall.  This plant is quite common in our area and is generally found in wet areas. Anyone who has attended some of the old seed dispersal walks at Parker Dam has probably had the fluffy silver seed pods pointed out to them.

The vines of virginiana and terriflora are very similar in appearance, although virginiana does not produce the proliferation of 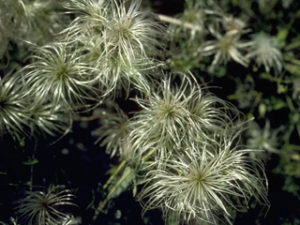 flowers that are common to terniflora. This is probably why the non-native version has always been the more popular of the two. On the plus side virgin’s bower does not proliferate at the rate of sweet autumn clematis. Fewer flowers equal fewer seeds. This one does not have to be weeded out nor is it considered to be an invasive species in any of the 50 states.

Physically the main difference between terniflora and virginiana is the former and non-native species has smooth edged leaves while vrginiana has toothed leaves. Virgin’s bower is also a smaller vine, ranging from 6 to 12 feet in height, although it is still quite robust. Virgins bower may also be a bit hardier by one planting zone.

The advantage of planting natives is that they are adapted to specific conditions in their range. While non-natives may thrive and proliferate, unless they genetically adapt over time, they may be detrimentally affected by things that the native variety will deal with. Native plants also have their niche in the environment and are less likely to cause cataclysmic problems to other native species as have imports such as purple loosestrife (Lythrum salicaria) and Japanese knotweed  (Fallopia japonica.) Grow native and reduce your workload as well as preserving native habitat.