When we have a dry summer we often retrospectively rethink our plantings. While in ground perennials survive with only a bit of extra watering, it is those baskets and planters that we so optimistically planted in May that keep us watering and watering and watering. While we cannot predict if we are going to have an unusually dry summer we can take precautions if we have planters in areas that are particularly susceptible to drying out or that cannot be watered daily. Planters that are in the sun dry out more quickly and require more water than those in more shaded areas. The plants transpire more and the sun evaporates the moisture from the soil. If a planter is in a windy area again the soil will dry out quicker and the plant will use more water, as the wind also has a drying effect.

Plants with a larger leaf surface will dry out more quickly than those with smaller leaves. While adding coleus to a pot makes for a splash of color when nothing else is in bloom the larger leafed varieties will wilt quickly under dry conditions despite the fact that some of the varieties will grow under sunny conditions. The same may be said of the sweet potatoes vines. These plants are the greatest thing ever for planters giving them a lush tropical appearance but they require large amounts of water because of the large leaf surfaces and rampant growth. Most common cultivar “Margarita”, with its large chartreuse heart shaped leaves droops easily despite the fact that it has the large tubers that should store water. Some of the smaller leafed cultivars such as “Blackie” don’t wilt as easily but none of them are drought resistant.

So what is drought proof or good for xeriscaping in pots? There are certain traits that you can look for in a plant that indicates it will need less water. Silvery and hairy leafed plants are generally drought tolerant. Silvery leafed plants reflect the sunlight and thus reduce transpiration or the loss of water through the pores. The fuzz on leaves provides a physical barrier that inhibits evaporation. These two traits often go together and make for a double whammy in drought tolerance. The licorice plant (Helichrysum petiolare) a fast growing, vining plant makes an excellent plant to grow over the sides of containers or in baskets. An upright plant with the same characteristics is Artemisia that comes in many different leaf shapes in both annual and perennial forms.

Geraniums and zinnias also have somewhat fuzzy leaves that make them fairly drought tolerant. The picture is of a pot of zinnias that I raised from seed this spring. They are in an iron kettle and have been watered 3 times this season. The first two times they were actually drooping. The third time was a mercy watering for the sweet potato vine that is also in the pot. They are in the hot afternoon sun and there are a lot of plants for the size of the pot. Succulents that store water in their    leaves 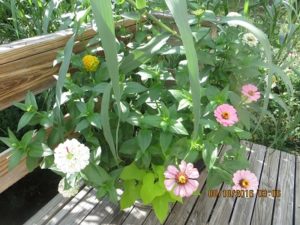 rarely need watering. Many of them aren’t known for their blooming prowess but the different leaf forms and colors can make for an interesting planting. One that does bloom and is easy to find is the kalanchoe. It flowers in clusters and the colors range from white through orange, yellow, red and shades of pink. Even when not it bloom it has an interesting leaf shape. Portulaca is another and it blooms reliably all season or you can choose the showy iceplant (Delosperma spp). Ice plants are perennials. Although hardy to zone 5, they do like our wet winters. As most perennials they do not bloom continuously but are spectacular when the do.

Plants with tap roots or roots that store water are also great in dry weather. The variegated yuccas make a striking container plant that can be over wintered in the ground. Asparagus ferns also do well although they may prefer a shadier area. They have bulblets on their roots that store water and they also have very little surface area on their leaves. Plants with needle like leaves are also drought tolerant. Again they lose less water through evaporation. A spider plant will go for weeks without water as their roots also are storage areas. Herbs also tend to require little water with the exception of the ones like basil and parsley. There are oreganos that are ornamentals like ‘Kent Beauty’ that is grown for its flowers. ‘Aureum’ or creeping gold marjoram is another that is quite attractive with its golden leaves. Lavenders will bloom for long periods of time and have attractive silvery grey foliage. There are also tropical sages that have spectacular orange flowers. All will thrive in sunny dry conditions. The dracaena spikes that are to be found everywhere and in a couple of different colors are drought resistant because they have narrow leaves. The same is true of small grasses that can be grown in containers. Marigolds tend to be drought resistant and lantanas almost never require watering. Keep these plants in mind for next year. Putting a couple in with those petunias might just keep a planter looking respectable should we have another dry summer.