We recently had a question as to whether black-eyed- Susan is a perennial, a short lived perennial or a biennial. For some gardeners the clumps come back every year, grow bigger and eventually require division. For other gardeners the plants will reseed but the plant never seems to get bigger but there are always black-eyed-Susans blooming at the end of the summer. And for the unlucky gardener the plant disappears completely never to return. The confusions lies not so much with the plant but with the nomenclature.

There are reportedly 145 different species in the genus Rudbeckia and uncountable cultivars.  Many of them are referred to as black-eyed-Susan. When speaking of this genus it is not unusual for all or at least most of its members to be referred to as black-eyed-Susan. This is why taxonomic names are preferable when buying plants. You still may not get the plant that you think you are getting but at least you can state definitely that the plant has been mislabeled rather than you don’t know what you are asking for.

Rudbeckia fulgida, aka as orange coneflower, is the reliable perennial form of black-eyed-Susan. It is a clumping perennial that grows to about 3 feet in height and width. It thrives in most soils but prefers a moist but well drained location. It grows in either sun or semi-shade and blooms in August. The flowers are yellow/orange, multi-rayed and have a raised 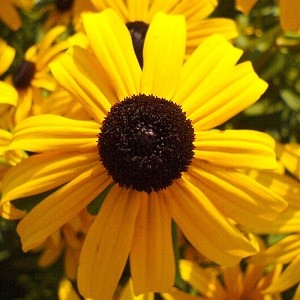 brownish center. Propagation is generally by division although the plant will reseed itself. This species is a native perennial and will form colonies in fields and meadows. It can become invasive in the garden as it also spreads via rhizome but it is generally controllable.

The most popular cultivar is ‘Goldsturm’. Its full taxonomic name is   Rudbeckia fulgida var. sullivantii ‘Goldsturm’. ‘Goldsturm’ is about 2 feet tall and blooms prolifically from mid-summer to fall. The flowers are larger than species plants, ranging from 3-4 inches across. The flower color is in the darker yellow shades.

‘Goldsturm’ does not come true from seed. If you do not deadhead the flowers eventually your patch of ‘Goldsturm’ will revert to a wild form. The ‘Guldstrum’ plants reach the end of their natural life span or are crowded out by the more vigorous non-hybrid seedlings. We suspect this is what happened in the bed at the entrance to Penn State that Julie now tends. This was a carefully planted bed with two types of orange and yellow daylilies that bloomed at different times, irises, lavender, black-eyed-Susans, and snow-in-summer (Cerastium tomentosum)   cascading over the edges of the bed. Very pretty and something was always in bloom. The bed’s tender moved away and it was cared for by whomever had a minute or two. Eventually the neat, low growing black-eyed-Susans turned into monsters that took over the bed and shaded the other plants out. It was beautiful in the late summer but the rest of the plants struggled and if and when they did bloom they could not be seen. It took a have dozen of us almost all day to remove the black-eyed-Susans and mulch the bed. They persisted in reemerging for several years.

The second plant that is commonly called black-eyed-Susan is Rudbeckia hirta. This is the biennial, short lived perennial that is even sometimes grown as an annual. The plant spreads readily from seed. It will bloom the first year from seed sown in each 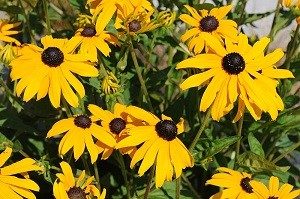 spring or started indoors. The plant will grow in most soils except those that are wet and prefers full sun. Unlike it cousin R. fulgida it does not spread by rhizomes or form clumps that need to be divided. The flowers are multi-rayed, orange/yellow with a raised brown center. They are almost indistinguishable from R. fulgida.

So with R. hirta and R. fulgida having flowers that are so similar, bloom at the same time and generally filling the same niche in the garden how do we tell them apart? The easiest way to identify them by simply looking at them is to check the leaves. The leaves are a bit different in shape but the telling feature is described by the name ‘hirta’. ‘Hirta’ means hairy. R. hirta has leaves and stems with fine hairs. Even the seedlings are identifiable by these fine hairs. If a plant is described as black-eyed-Susan and the leaves are hairy do not buy it unless you are prepared to enjoy it as an annual and collect the seeds for replanting. If the leaves are smooth it is R. fulgida and a true perennial.

One Reply to “Black Eyed Susan?”