Many landowners have been culling ash trees in anticipation of the devastation anticipated by the arrival of the Emerald Ash Borer   (There is a very good reason for this and we will explore it next month.)  The next victim of insect invasion may be the hemlock. Cook Forest has one of the most important stands of virgin hemlock in Pennsylvania. It is also the largest in the eastern part of the country.  The tree also grows wild in other parts of Pennsylvania and various species of hemlock are frequently used in landscaping. Both the domestic and wild trees are in imminent danger.   The culprit is the woolly adelgid.

The most obvious sign of the woolly adelgid is the white sticky covering it produces to protect the eggs and the mature insect when the reproductive cycle begins.  The adult is 1/16th of an inch long and the red/brown to purple/black insect is fairly 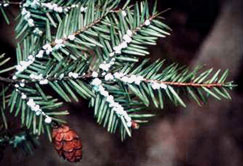 inconspicuous. The white, woolly egg sacs are found on the tips of hemlock branches from late fall to early summer.

All woolly adelgids are female and reproduce asexually in a process called parthenogenesis. Two crops of insects are produced each year. The winter generation is most prolific, with each insect producing up to 300 eggs. The winter generation hatches in June and begins its feeding cycle as the first of its 4 nymphal stages. As the temperature rises the insects stop feeding and enter dormancy. The dormant nymphs produce a white waxy substance that protects them. As temperatures cool in the fall they come out of dormancy and again begin to feed and continue through the winter. This generation matures in March and lays its eggs.  The spring generation ovisacs contain only 20-75 eggs. These hatch in March and mature in June of the following year.

The first instar generation just after hatching is the only generation that is likely to travel. Generally, they search out a location at the attachment point of the needles and stay there to feed throughout their lives. Any spreading takes place through the action of wind, birds or mammals that come in contact with the insects or the egg sacs. Infested nursery stock also spreads the insect.

The woolly adelgids is particularly destructive as it feeds on the stored starches that the tree needs to grow and survive. While the woolly adelgid lives and breeds on all species of hemlock, the only species that are destroyed by the insect are the eastern and Carolina hemlock. The Carolina hemlock is a southern tree and an infestation in these warmer regions can kill a tree in as little as 3 – 6 years. The eastern hemlock is a more northern tree and will survive longer. It can withstand an infestation from 4-10 years before succumbing. The eastern hemlock is frequently planted as an ornamental due to the many cultivars that exist in both tree and shrub form. It is also our native hemlock.

The ability of a tree to survive depends on a number of factors that affect the tree’s health. Tree location is important. A healthy tree in a suitable location will better withstand an infestation than one in poor health inappropriately planted. Weather conditions are also a factor. Prolonged drought will accelerate the mortality rate as will other insect infestations and diseases. Hardest hit to date are areas of Virginia, New Jersey, Pennsylvania and Connecticut. In an aside, Pat tells us that she has been informed that the woolly adelgid has already arrive in Cook Forest.

Control of the woolly adelgid is confined to individual trees and is only marginally effective at best. Prompt removal of an infected tree is the prescribed control for a small area. Removing bird feeders or anything that encourages animals to come in contact with trees can be used as a preventative measure. Standard sprays, insecticidal soaps and horticultural oils are only effective if the tree can be sprayed to the extent that the insects are covered. Systemic that are spread at the base of the tree may work. . The only hope for large areas are biological controls imported from Asia, which is the native range of the insect. While there are North American predators they have not been very useful in controlling the woolly adelgid. This is an ongoing study and may take years. Meanwhile the woolly adelgid munches on.