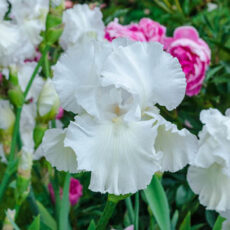 The bearded or German iris (Iris germanica) is one of the most sublime flowers that can be grown in our northern gardens. Its graceful shape and wide range of colors far surpasses the more mundane flowers that we cultivate. The only failing of the iris is that its bloom period is a short two to three weeks at most and, while its sword like leaves are not unattractive, they add little for the rest of the growing season.
When the re-blooming iris or remontants were introduced iris fanciers were interested but perhaps not jubilant because the flower form and colors were considered subpar. This is less true today as the re-bloomers, due to the work of hybridizers, have come a long way. Most of them not only equal the standard iris but many of them are fragrant.

What makes these irises rebloom? The normal iris overwinters and each mature rhizome contains the beginnings of a flower stem. It then takes almost a year for these to form, grow and produce a flower. The re-bloomers undergo a second cycle that doesn’t seem to require chilling. If the plant is watered and fertilized and not permitted to go dormant another flower stem will begin to form. This takes place after the first blooming and another set of flowers will be produced in late summer or early fall.

Because the re-blooming irises are growing quickly, it is important to keep them thriving. They need considerably more attention than the normal iris. If rain isn’t sufficient re-bloomers should be watered weekly. In the spring and then again in early July, the irises should be fertilized. A low nitrogen fertilizer will keep the plant from concentrating on producing leaves. Either 10-10-10 or 5-10-5 are acceptable. Addition of a super phosphate fertilizer will encourage bloom. These irises need at least 5 hours of sunlight every day and the more they get the more they will be likely to rebloom.

Some re- bloomer varieties need to form fairly large clumps before they will rebloom. This must be balanced with their need to be divided which, because of their vigorous growth, can be as often as every other year. To divide remove half of the clump after the first bloom. This will leave the main plant to rebloom. Do not cut back the leaves of the main plant. Dig deeply as it is advisable to retain as much root as possible, since growth will start quickly. Never cut back these irises when they are not being transplanted or there will be no second blooming period.

If this all sounds too good to be true of course it is. No one seems to know what makes these strains of iris rebloom. Whether it is some genetic quirk or hormone production that triggers the second bloom is unknown. What is known is that the whatever induces the bloom is not reliable. Even the growers admit that the re-bloomers will not produce a second set of flowers every year. The most reliable that we grow is the white Immortality and even that one doesn’t rebloom every year. Cultural conditions most certainly play a role. Too little water or sun may inhibit a second blooming period. Climate most probably exerts some control. Cooler nights may play a role in inducing a second flower stem. Conversely, excessive heat may cause the iris to go dormant.

If this isn’t sufficient to make the iris lover tear out handfuls of hair some of these irises will only produce a second wave of bloom in cooler climates, while some will only rebloom in zone 7 and further south. This is not information that is easily attainable. It is more of a trial and error process. Buy it and try it. If it re-blooms then it is one appropriate for whichever zone in which it is planted. If it doesn’t hopefully it will bloom at least once. Irises are tricky. If they are happy they are a wonderful plant that produces a beautiful flower. If they are not happy where they are planted they will limp along and eventually disappear one winter. When they are happy they are a joy to grow.

One Reply to “Re-blooming Iris”