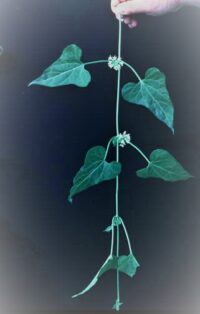 Honeyvine milkweed is a native North American wildflower found in the northern and central US and in Ontario. It is scarcer in the more northern regions of its range. While the monarchs might like it, it is not a desirable garden plant having found its way on to the list of noxious weeds. Farmers are not fond of it either as it likes disturbed ground and deep, rich soil. It will twine up among crops making harvest difficult.

Because of its prolific root system it takes water and nutrients away from field crops and gardens alike. The vine has a fibrous root system as well as a taproot making it difficult to eradicate. The taproot can go as deep as 6 feet. It spreads by both root and seed. It is a prolific seeder producing a flat seed pod similar to that of other milkweeds. The pod opens to numerous seeds each adorned with a tuft that helps them spread via the wind. Once honeyvine milkweed has arrived there is apparently no getting rid of it.

The vine can reach 30 feet and will grow up among bushes hiding among the foliage. The leaves resemble bindweed but are more heart shaped with elongated tips and less arrow shaped. They are 3-7 inches long with white veining. Leaves grow in pairs on petioles with the flowers on short stalks at the nodes between the two. The flowers are white, small (1/4 inch), vase shaped and grow in clusters.

Gardeners and farmers might not want this vine around but it does have its uses. It is a host plant for the monarch butterfly as previously mentioned. With the general loss of monarch habitat every little bit helps. Bee keepers are also using the vine to attract bees. The flowers produce a scent that is irresistible to bees. They also manufacture large amounts of pollen from which the bees produce bee bread a staple in the diets of the larvae. Bee bread is a fermented combination of nectar and pollen mixed with digestive juices. It a major nutritive source of vitamins, minerals, amino acids and enzymes as well as fats, carbohydrates and proteins.

Curiously, despite being listed as a noxious weed honeyvine milkweed, under its synonym Cynanchum laeve, is listed as an endangered species in Pennsylvania. This may account for the fact that it is rarely listed as a monarch host plant or is seen in pollinator gardens which often harbor species of plants that are not ideal for flower gardens.

If proof were needed that there is no such thing as a weed honeyvine milkweed provides it. Despite its nuisance value to farmers and its lack of desirability in a garden setting it provides an invaluable service. It provides sustenance for honey bees and quite possibly the pollen is a source of substances that prevent microbial growth in the hive. It is also the host plant for the monarch caterpillar which will feed only on members of the milkweed family. Humans may call it a weed but for monarchs and bees it is home and food.