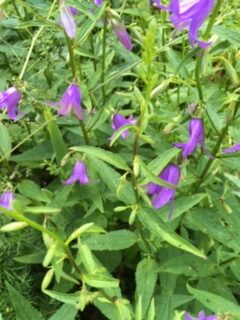 We have a new/old plant to review this month. In our last garden club sale we had several ladybells. This bellflower look alike was growing wild when we bought the land on which we are currently living. No one had lived there for years and there were a number of things growing which had established themselves in the yard. Most of them went away as the yard was repeatedly mowed and the verges weed whacked. A couple of years ago I found a few of the ladybells and moved them into a cultivated area. They have multiplied rapidly and are now available for division.
There are a number of species of ladybells, which like other bellflowers are members of the Companula family. Two are hardy in our area and apparently the ones most commonly available. They are 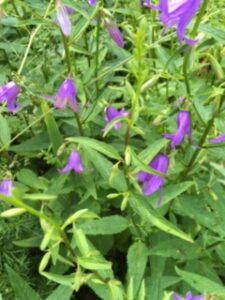 Adenophora confusa (aka Adenophora stricata subs confusa) and Adenophora liliifolia. This is where it gets tricky. After doing some research on the subject it seems that ladybells are not very common and that most of what is sold under that name are other types of bellflowers particularly Companula rapunculoides or creeping bellflower, which is quite invasive. This leaves us with a lot of information on ladybells that actually describes other plants.
The major taxonomic difference between the ladybells and other bellflowers is that the ladybell flower has a swelling at the base of the style that surrounds the ovary. From this they get their name. Aden is translatable as “swelling” and phoreao as “bearing.” Since they are not blooming just yet this will be confirmed as soon as the flowers appear. Meanwhile, they are an interesting plant so let’s take a look.
Ladybells, despite their propensity to establish themselves, are not native to North America. They are found in Central Europe as far north as Siberia but the majority of the 62 different species are found in eastern Asia. The southern varieties including Adenophora pereskifolia are hardy between zones 7-9. The northern varieties including the common ladybells(confusa) and the lily leafed ladybells (liliifolia) are hardy between zones 3-7. The fact that they are very cold tolerant makes them a desirable plant for northern gardens.
The colors of the flowers can be white, deep blue, light blue or dark purple. They are borne on an upright raceme and are either hanging or facing up. Confusa or the common bell flower has a purplish blue drooping flower. It reaches a height of 36 inches more of less. There is a hybrid variety known as ‘Amethyst’ that is a more compact with a lighter flower.              The lily leafed bellflower is shorter at 12-24 inches. It has a blue downward facing flower. The leaves on this one are narrower than that of the common bellflower usually not exceeding one inch Both have alternate leaves that are longer than they are wide. Some species have whorled leaves in a series of three. This is true of the purple lady bell or pereskifolia that is more at home in the south.
It gets confusing again with the roots. Many sources describe the root as being tuberous. This however is Adenophora triphyla or Japanese lady bell or four leafed ladybell. In Chinese it is nan sha shen and is used in traditional medicine. It primary use is in treatment of throat ailments and bronchitis. The plant has been cultivated as a food plant in Japan and the root is said to be sweet and eaten boiled. The root on confusa is more fibrous with the main root resembling a “skinny parsnip”. liliifolia root is described as “spindle shaped” by several studies of populations in Europe. This however appears to be a white or pale blue flowering plant which is uncommon in the US. The US version has a dark blue flower. Because of the taproot the plant is said not to transplant well. However, the pictures of the taproot shows it as very narrow with lots of fibrous roots. It doesn’t seem that breaking the taproot would cause the death of the plant.
This brings us to the invasive reputation that Adenophora has acquired. Nowhere is the root system described as a rhizome except in a few cases where apparently a bellflower is being mistaken for a ladybell. Consequently the plant is probably not as invasive as some growers seem to be finding it. It is suggested that the lily leafed species can be propagated from pieces of the root but again this is not the identical plant which US nurseries are selling as liliiflora. It is all very confusing and I suspect that different species are being described under the same names.
Ladybells prefer full sun to partial shade. They like a rich, well drained soil. If they are happy they require little care since, while they are not a native plant, they have adapted to life beyond the garden. It has no pests although it is suggested that small plants may be eaten by slugs. The plant should be deadheaded to encourage continuous bloom and to prevent excessive reseeding.
Propagation is by seed and again there is considerable controversy as to how this should be done. Fall sowing is advised although stratification is said not to be necessary. Perhaps since the optimal germination temperature is listed at 41 degree F the seeds will only germinate in very early spring so must be sown in the fall. Seeds can take a very long time to germinate up to 90 days. They can also be started indoors from seed and rooted from cuttings.
I’ll be watching this plant this summer as it blooms. While it may be a bellflower rather than a ladybell I’m not going to be too embarrassed about my initial identification which took place many years ago and pre -internet. Even the experts are hard put to tell the difference. It is interesting that there is so much confusing regarding this plant especially among nurseries. Many of them are apparently selling a semi-invasive plant that propagates by rhizomes as a tame and well behaved plant that looks similar but has a tap root. It makes one wonder just how often plants are mislabeled. On a side note it appears that European seed companies are more reliable than American ones for getting it right as far as the Adenophoras are concerned.